Eulogy for William Warren, the Dean of All Expat Authors in Thailand 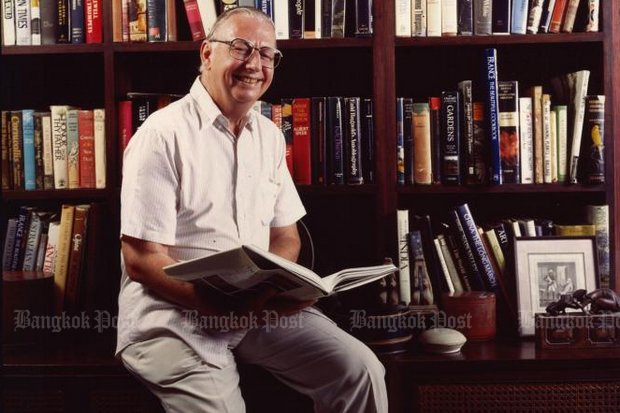 Over five decades in the kingdom, William Warren, a friend to both Jim Thompson and the most famous expat murdered in Bangkok in the 1960s, produced more than 50 books and hundreds of articles, writes Jim Algie, before his death in 2017.

When I first arrived in Thailand in the early 1990s, one writer’s name cropped up again and again in magazines and newspapers and on bookshelves: William Warren.

He wrote features about Thai culture and cuisine, guides to the islands, history pieces, profiles of high-so Thais and highly regarded expats. 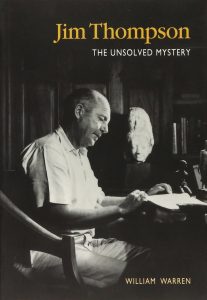 Cover of the most popular book by William Warren

His most famous book is a chatty but not very scholarly biography about his former drinking buddy, Jim Thompson, the silk trader and ex-spy who disappeared in Malaysia in 1967 and was never seen again. Warren discusses all those conspiracy theories in Jim Thompson: The Unsolved Mystery. Though my favorite from his backlist is The Elephant in Thai Life and Legend, a coffee-table book from 2000 embellished with superb photos by Ping Amranand.

Sooner or later, at the FCCT or a book launch, or a restaurant opening, I thought I’d run into him, but that never happened. His books and stories were everywhere, but he himself was nowhere to be seen.

Next to nobody I knew had ever even met the guy. The few who had said things like, “He’s old and frail now,” or “Nice guy but he doesn’t get out much.” 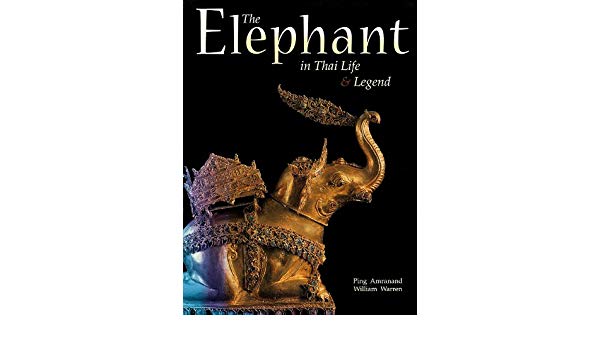 My favorite book by William Warren was published in the year 2000.

THE FIRST AND LAST MEETING

At long last, in 2014, I was helping to edit a history book called Americans in Thailand for Editions Didier Millet (EDM) in Singapore, and contributing a chapter on the post-World War II era, featuring such prominent expats as Alexander MacDonald, the founder of the Bangkok Post, and his colleague from the OSS (a precursor to the CIA), Jim Thompson. 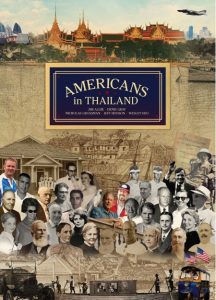 William served as an adviser on the book.

Perhaps the only living farang qualified to vet that chapter was a man who’d lived through much of that period: William Warren. EDM’s chief editor, Nick Grossman, arranged a meeting with him so we could go over the chapter and I could interview Bill to dig up some other interesting details to include from that era.

Meeting such a legend, whose work I’d been reading for 20 years, was nerve-wracking. I could imagine encountering some old blowhard wanting to hold court who would wield his expertise like a blunt weapon to fend off all challengers and younger writers. Or would he be some cantankerous codger in mourning that his heyday had passed? Or some doddering and barely coherent guy a few steps from the grave?

At his old house on Soi Ekkamai, his Thai male carer led me into the living room. The house looked like a low-rent version of Jim Thompson’s abode, a lived-in museum resplendent with Thai silk tapestries, Buddha images, wooden elephants, Japanese antiques and teak cabinets.

It was around four in the afternoon and William was sitting on the couch with a bottle of cheap Thai whiskey on the coffee table, beside an ashtray and a pack of Thai cigarettes.

“Thanks for meeting with me, Mr. Warren. We appreciate your help with the book.”

“You’re welcome, but call me Bill,” he said with a smile that cracked open his leathery features and a gentle drawl that spoke volumes about his upbringing in Alabama. “Please have a seat.”

I sat down in an old upholstered chair with springs that creaked off to his right. “Thank you.”

Bill looked up at the ceiling and said, “Thank god young people still have vices.”

We had a good long laugh and that dispelled my tension.

As it turned out, Bill was not one of those veteran expat braggarts forever going on about how the place had changed for the worse and we all missed the golden days. He didn’t exude any bitterness either.

Most of the time he’d wait for me to ask a question and boil his answers down to concise statements that were easy to transcribe. He was generous like that and didn’t need any schooling in the interview process. 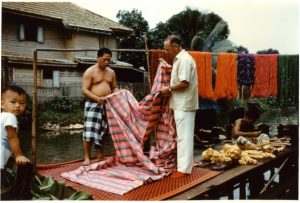 Silk trader Jim Thompson did daily inspections of the yarn for quality control.

“What was it like to be a dinner guest at Jim Thompson’s infamous parties?”

“Jim was a good host, but the house was more of a showcase than a home. There were hardly any chairs in a lot of the rooms. It was as if he didn’t want folks to linger too long there.”

“What do you think should be added to the Jim Thompson part of the chapter?”

“If it wouldn’t be too much trouble, my partner, Charles Sheffield, who died very young of cancer in the 1970s, took over the helm of the company and guided them through a difficult time after Jim’s disappearance, but his role has been played down.”

“Let’s write him back into the story then.”

“Thank you. I’d appreciate that.”

As we emptied the bottle, I took the chance to sate my own curiosity about an infamous homicide in the expat community of the 1960s, when an editor named Darrell Berrigan was slain in his own car. Had Bill ever met him?

“Yes, Charles and I had dinner with him the night before that.”

In Bill’s book Bangkok, he devoted a small section devoted to the gay scene, writing, “Dr. Peter Jackson, an Australian academic whose has made Thai homosexuality his field of study claims that the word ‘gay’ was taken up in the mid-1960s following the murder of an American named Darrell Berrigan, the editor of the Bangkok World, who was shot in the back seat of his car by a male hustler he had unwisely picked up, and the circumstances left little doubt as to what had been going on. The World and the Bangkok Post, the only two English-language papers at the time, were discreet in reporting on the case.”

But the Thai press, he notes, gave it the gory tabloid treatment, referring to both men as “kathoey” (transvestites), which eventually inspired a whole new dialogue about homosexuality.

One can only surmise that part of the reason Bill fled his conservative and fundamentalist state of Alabama was to escape that kind of repression.

He would never live there again. 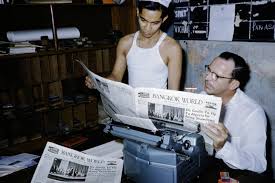 Berrigan with one of the Thai staffers at the Bangkok World.

When Bill passed away in late 2017 of natural causes at the age of 87, I only found out about it because of a four-sentence notice in the Bangkok Post. It was disappointing to see such a stalwart like him get such short shrift.

Only recently, however, did I find that my former colleague, Nick Grossman of EDM Books, had written a very in-depth obituary for the Bangkok Post, in which he described how Jim Thompson introduced Bill to the expat community, and Bill’s first passage to Bangkok:

“So in 1960, he took a further leap that bewildered his mother and friends and booked a Dutch freighter for Bangkok. Before embarking, he wrote to Chulalongkorn University inquiring about a position and asked around at publishers to gauge their interest in stories from Asia. He received no promises, but went anyway,” writes Nick.

“The Dutch freighter carried only eight passengers: a missionary, his wife and three children, a couple who were emigrating from New Jersey to Australia and Warren. The young man from landlocked Georgia had a large cabin to himself, received four meals a day, watched a movie once a week, and passed the time by reading and keeping a journal he described as “pretentious.”

“Freight passage wasn’t the way to go if you were in a rush,” he said. “But it was a great way to travel. I would love to do it now.”

A few weeks after William’s passing, at one of the Sunday jazz jams at CheckInn 99, I got talking to another veteran expat author, Christopher Moore, who had met Bill a few times and is also an admirer of his writing. 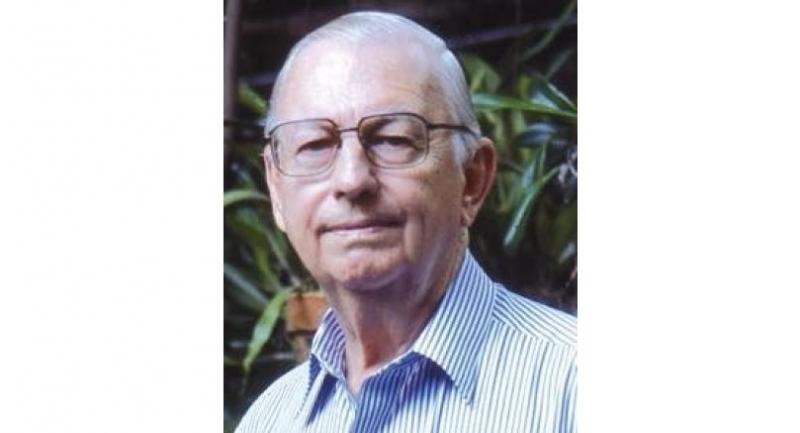 Since I hadn’t seen Nick’s eulogy yet, I told Chris that Bill deserved a better sendoff and I should write something about him. He thought that was a good idea and agreed to send me a quote, which reads: “Bill combined the best traditions of two other literary Williams. William Faulkner and William Somerset Maugham. Bill was the quintessential gothic southern gentlemen raised in a culture of blood feuds and slavery who found himself in Thailand. After 50 years living in Thailand, Bill knew the secrets of the foreigners and the Thais. Like Maugham, Bill was that extraordinary insider who never quite assimilated. He knew who he was and loved Thailand, spinning memorable stories from a deep well.”

After the Americans in Thailand book came out, Bill sent me a handwritten thank-you note for restoring his late partner to a position of prominence in the Jim Thompson story. After that, we spoke on the phone a couple of times but never got together again.

I will always regret that and always remember him fondly for being such a kind, funny and humble man, whose prodigious output included more than fifty books and hundreds of articles.

So here’s to the dean of all expat writers in Thailand, to whom we all owe a debt of gratitude. Knowing Bill, he’d probably want to add, and here’s to all you young people who still have vices.

Jim Algie’s latest book, “On the Night Joey Ramone Died,” feature a cover blurb from Timothy Hallinan, author of the acclaimed Poke Rafferty Bangkok Thrillers series, who called it, “the funniest sad book and saddest funny book I’ve read in a long time.” The book is available on Amazon as a paperback and ebook.