Sunthorn Phu: The Shakespeare of Siam 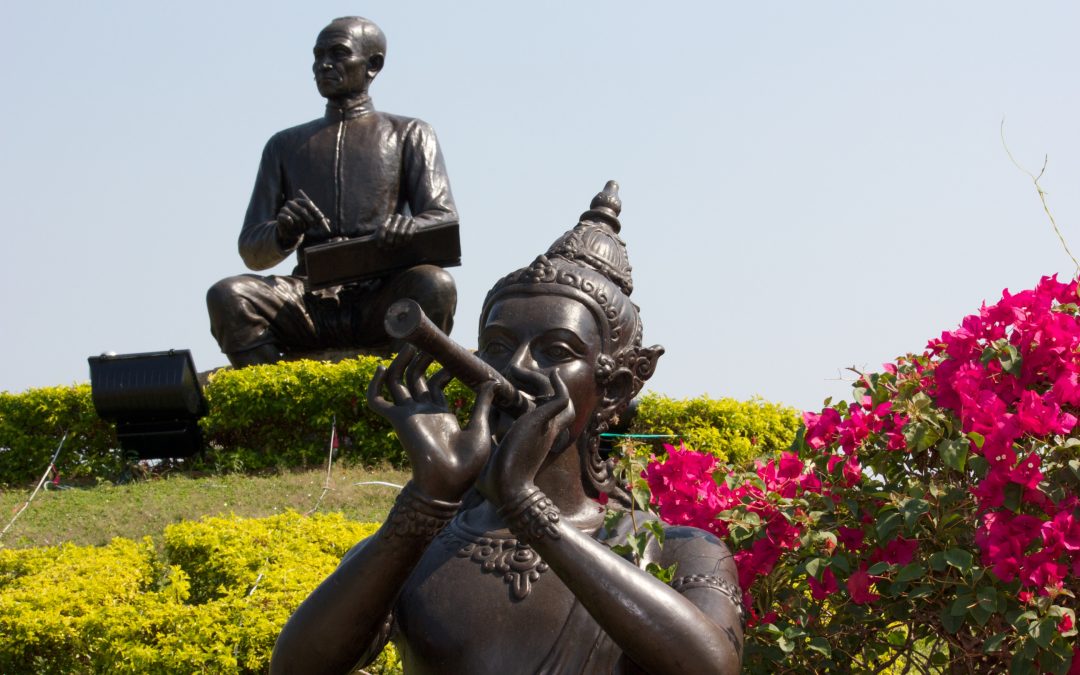 The birthday of Thailand’s most revered writer on June 26 is an occasion for performances of the work of Sunthorn Phu and remembrances of his legacy, writes Jim Algie in the June 2019 issue of Sawasdee.

Looking around the Sunthorn Phu Memorial Park in Rayong province at the statues depicting the characters and scenes from his poems will leave many visitors awestruck by the author’s imaginative powers.

In the fountain, a soldier rides a dragon-like steed in front of an old sage with a long white beard who is ready to perform some feat of wizardry. Near the street a gigantic female monster holds up a bouquet – or is it a weapon?

Beyond them, sitting atop a hillock in the park, the bronze statue of the wordsmith gazes down upon his creations like a proud father. 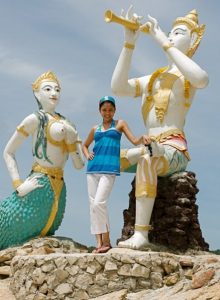 Some of the most archetypal figures from Sunthorn Phu. (Photo courtesy of Learn Thai with Mod.)

More than a century before J.R.R. Tolkien would conjure up such epic-length fantasies as “Lord of the Rings” and the Nobel prizewinner Gabriel Garcia Marquez invented a new literary hybrid called “magic realism,” the work of Sunthorn Phu foreshadowed both movements.

As an exhibit in the park’s museum shows, UNESCO honored his contribution to literature on the bi-centennial of his birth in 1986, when he was named a great world poet.

Born in Bangkok in 1786, just four years after the city was founded, the author chronicled the kingdom’s cultural changes and social upheavals in an earthy style that marked a radical departure from the formal strictures and florid verse which epitomized Siamese poetry of that period.

The famous prince Phra Aphai Mani with his magic flute

His detractors called it “market verse.” His admirers labeled him the “people’s poet.”

The entry of Sunthorn Phu into royal circles came through the back door, quite literally, as his mother worked as a wet nurse at the Grand Palace. In his younger days the budding author’s rebellious streak frequently got him into trouble – especially after he started an illicit and disastrous affair in the court with a woman named Chan.

Attempting to outrun his heartbreak and adversaries, the writer traveled overland to visit his father’s hometown of Klaeng in Rayong province. The poem he wrote about the journey inspired a new type of verse in Siamese letters: the nirat or travel chronicle. He dedicated it to Chan.

After he returned to the Grand Palace and married her, King Rama II granted him the title of court poet. It was a short-lived accolade. Courting disaster as ever, Sunthorn Phu took to drinking and brawling and wound up in jail. In order to raise money for him, the guards smuggled out excerpts from what would become his masterpiece, Phra Aphai Man, to his many supporters on the other side of the bars.

The epic poem, which is around 600,000-words long, took him almost 20 years to complete. It marked a quantum leap for both Sunthorn Phu the writer and world literature. As a precursor of Game of Thrones and science fiction, Phra Aphai Mani displays a flexible and fertile imagination working in overdrive. Full of battles, romantic betrayals, new forms of technology and magical transformations, Sunthorn’s poem takes Thai and Hindu mythology to its zenith. At the same time, it’s grounded in such ageless emotions that the work is still taught in schools and has inspired everything from cartoons to comic books and films. 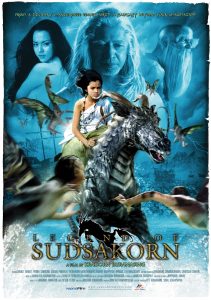 The 2006 movie based on the most famous work by Sunthorn Phu.

In 2006, the last movie version, retitled The Legend of Sudsakorn, hit theatres in Thailand to rapturous reviews. Mixing real scenes and CGI, the film starred Charlie Trairat as the son of a mermaid, facing down demons and she-devils, on a quest to find his father.

Koh Samet is an important setting in the work. The island’s significance has been commemorated with three different statues. Each depicts a different scene from the poem. The most photographed statue is that of a mermaid and prince on Hat Sai Kaew Beach. In a more secluded section at the north end of the beach is a depiction of the prince’s brother playing a magic flute that can wreak havoc or cast spells. At the Na Dan Pier stands a fearsome sea monster.

In Bangkok, the curious should seek out the museum dedicated to Sunthorn Phu at Wat Thepthidaram (Temple of the Heavenly Daughter), where he once lived as a monk and wrote portions of Phra Aphai Mani. This is not your usual dry and musty museum. The tour guides are monks. For photo props there’s a wardrobe of old costumes. Thanks to the magic of digital technology you can even have your photo taken next to the Siamese scribe.

As his birthday celebrations approach on June 26, the younger generation may wonder what relevance this historical figure has in today’s vastly different world?

That’s simple. Firstly, the so-called “Shakespeare of Siam” overcame many personal obstacles to live out his final decades as a revered court poet who passed away at the age of 70. Secondly, the paradise that he created in parts of Phra Aphai Mani, free of economic tensions, racial divisions and religious frictions, is the kind of utopia that could still serve as a blueprint for future societies on earth.

Jim Algie’s latest book, “On the Night Joey Ramone Died: Tales of Rock and Punk from Bangkok, New York, Cambodia and Norway,” is available from Amazon for a song.