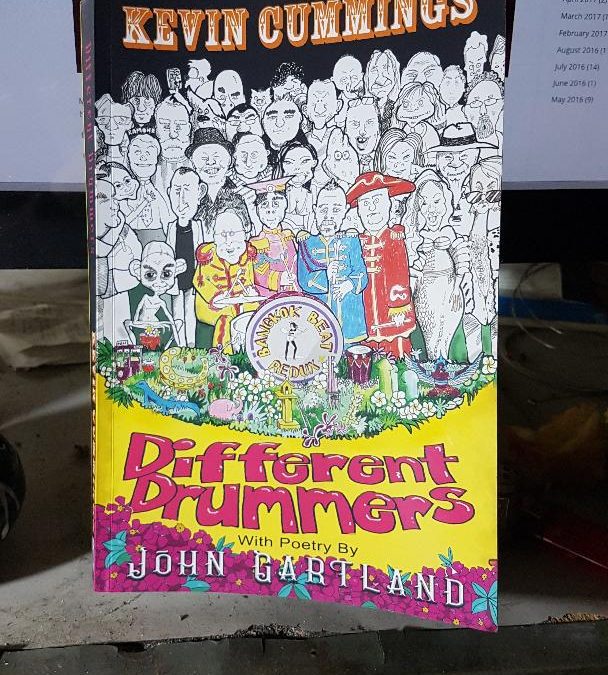 Meet some of the expat authors, musicians and a painter who have helped to make Bangkok into an international hideaway for mavericks and outliers with a creative bent.

One of the first expats I met in Bangkok was a fellow teacher at my school. He was a clever and witty guy, a terrible drunk and, so he claimed, a former member of the Welsh punk band The Alarm. When he attempted to sum up the expat community to me he said, “We’re all square pegs in round holes.”

Although that was the early 1990s, some aspects of the expat personality have remained the same in the more bohemian circles, or perhaps such marginal people are more drawn to the margins of life. After all, nothing is quite so liberating or isolating than living in a place where you can never really be a part of that country – and maybe wouldn’t even want to be. 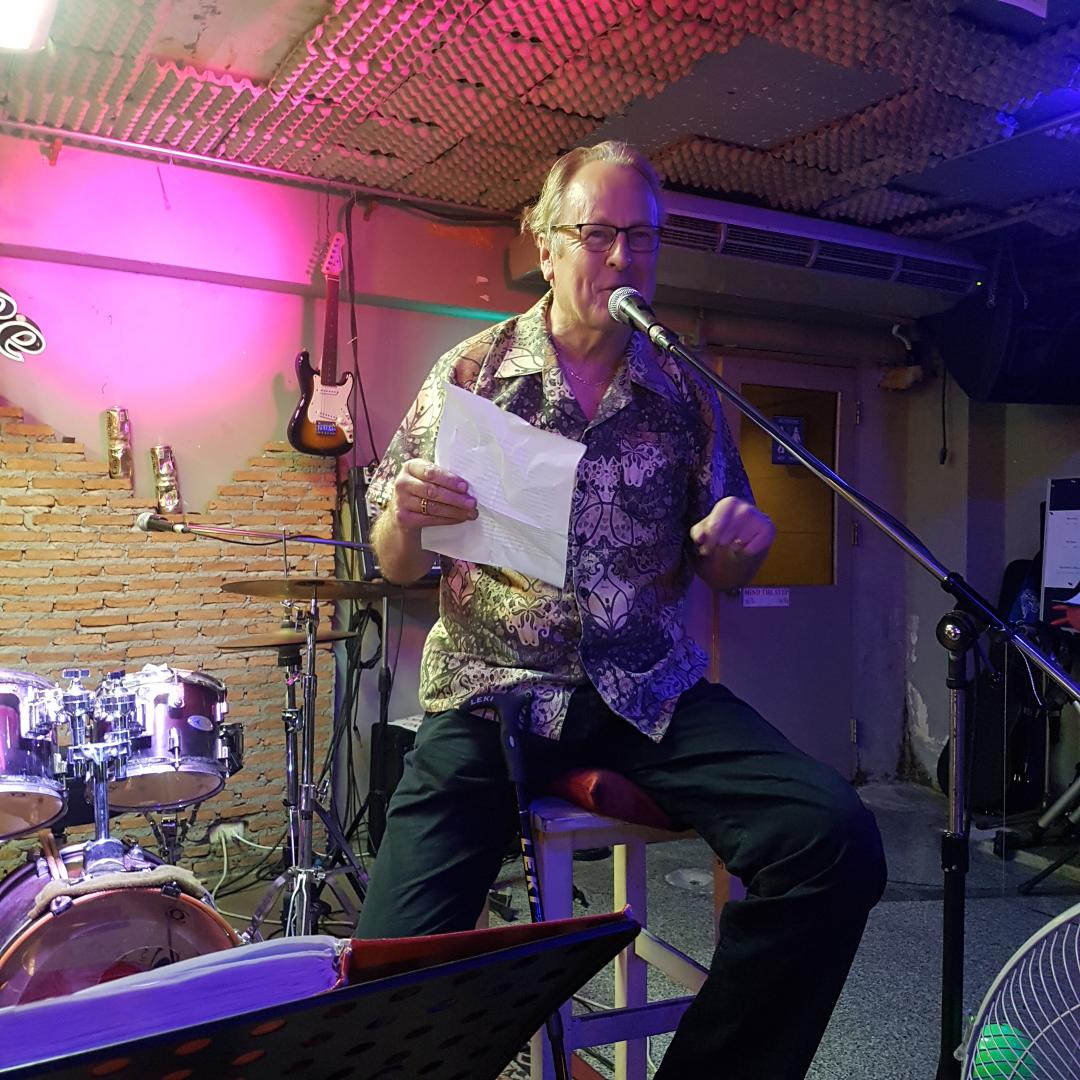 Kevin Cummings reads “A Short Story for Papa” at the Queen Bee in Bangkok. Photo by Jim Algie.

Kevin Cummings interviews quite a few of these ‘characters’ in this book. Many of the subjects are veteran authors who either live in Thailand, like Colin Cotterill, Christopher G. Moore, Joe Cummings, Lawrence Osborne and Collin Piprell, or frequent visitors who write about the country, like Timothy Hallinan, author of the Poke Rafferty Bangkok Thrillers.

Even for those who are not bookishly inclined, the experiences that many of these authors share will provide historical footnotes on the capital and shine a flashlight into some of its darker crannies. As Tim noted, “On the surface, Bangkok is not the city that I first saw in the 1980s when parts of it deserved the descriptive phrase Somerset Maugham applied to Monaco, ‘A sunny place for shady people.’ Now it’s a world-class city in every regard, yet its spirit seems to be the same to me, a unique and almost musical mixture of the sublime and the appalling.” 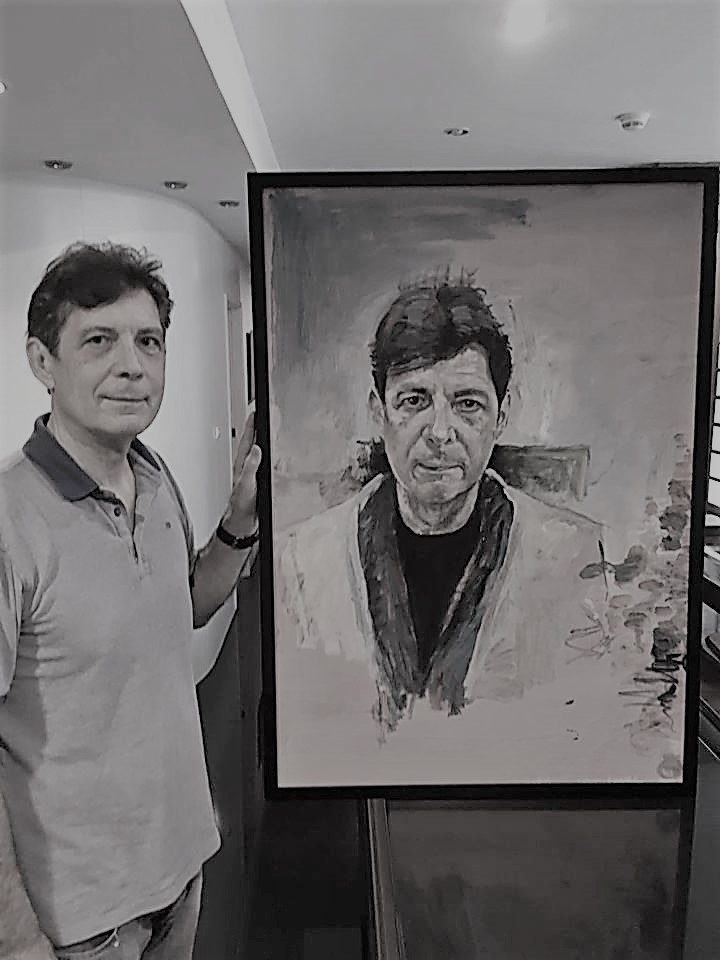 Portait of the crime writer and creator of the first detective series set in Bangkok, Christopher G. Moore, by Peter Klashorst. 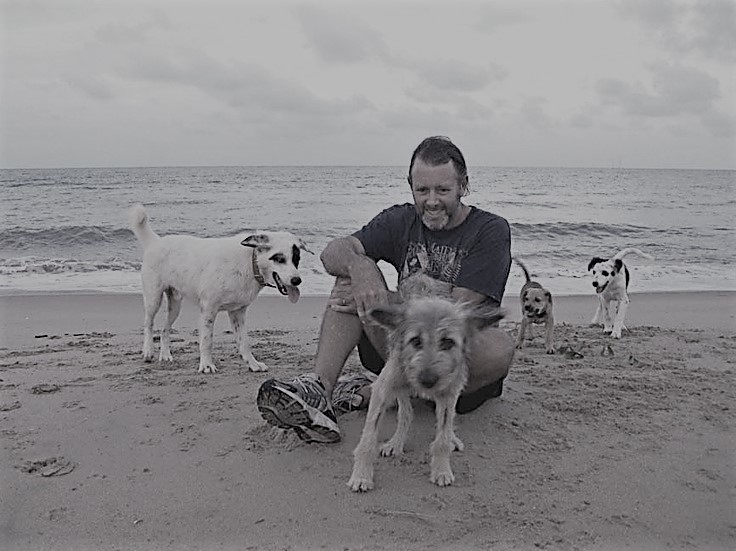 Author of the Dr. Siri mystery series Colin Cotterill with his dogs on the beach at Chumporn. Also a talented cartoonist and illustrator, Colin designed the cover of “Different Drummers.” 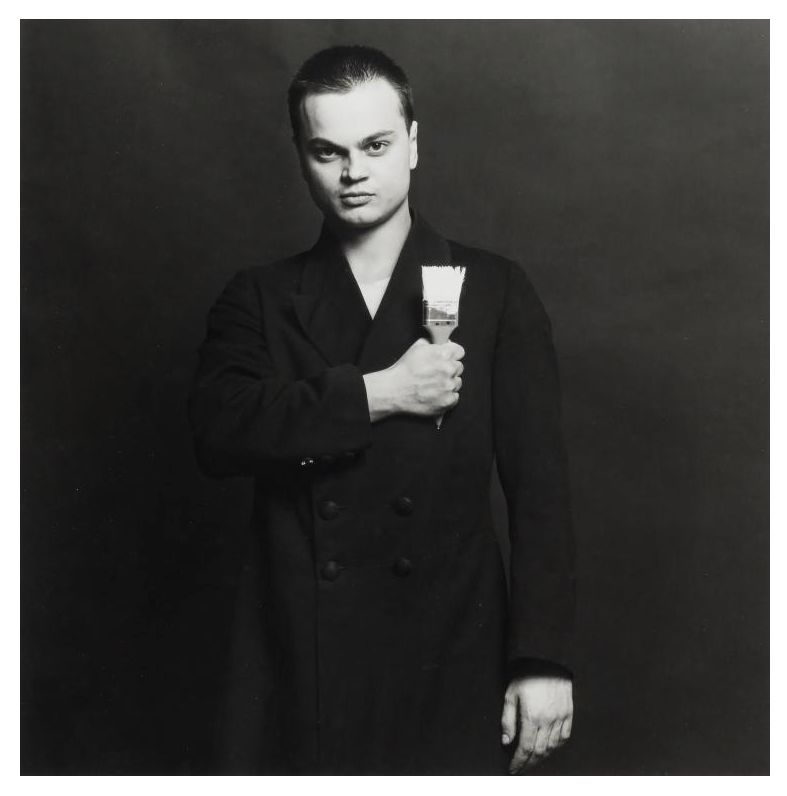 Dutch painter Peter Klashort has lived and worked in Bangkok, Africa, Cambodia and New York, where the late and still-legendary photographer Robert Mappelethorpe did this portrait.

For readers, these interviews provide backstories that inform the works of authors like John Burdett (“Bangkok 8”), whose scathing critique of Brexit in this interview carries over from the scathing portrayal of British colonialism in his crime novels. As the Englishman tells Kevin, “Our colonial forefathers were simply world-class gangsters who thought in a similar way to the kingpins of the Medellin cartels.”

In this “Bangkok Beat Redux,” a sequel of sorts to Kevin’s first collection of interviews, book reviews and blog posts, we also get to meet some of the top expat musicians in Bangkok, ranging from the constantly gigging Keith Nolan of the blues and soul band Cottonmouth, to Kevin Wood, a former pop star in Singapore, and John Branton, keyboard whiz and owner of live music venue the Queen Bee.

Whether they are writers or musicians – or the renowned painter Peter Klashorst – Kevin has a knack for throwing them some curveball questions, which means that Colin Cotterill talks about what he learned from his mother, Lawrence Osborne discusses his down-and-out days in New York before his rise as a literary wunderkind, and horror writer/Muay Thai gym owner J.D. Villines, talks about how his near-death experience in Isaan inspired the opening lines to his post-apocalyptic novel, “Dead Bangkok,” a book that is horrific and hilarious in equal measures. 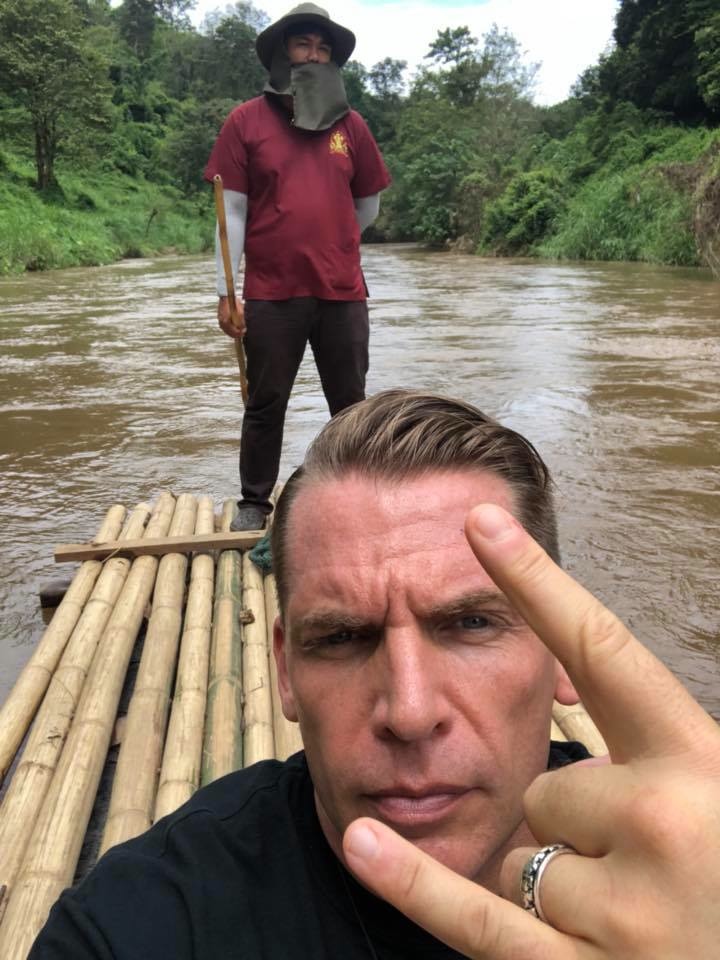 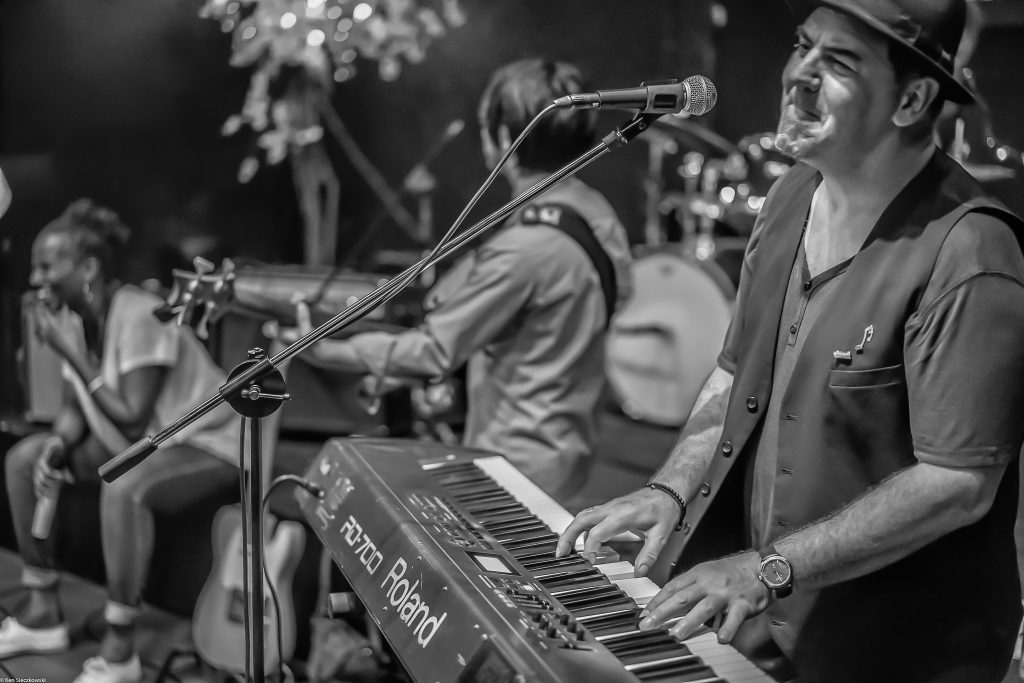 Keith Nolan (keyboards and vocals) is now collaborating with the hit-making Australian singer Deni Hines on a new album. 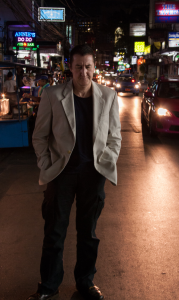 The centerpiece of Different Drummers is an interview with “poet noir” John Gartland, interspersed with selections from his work. It’s a clever way of showing how John’s working-class roots in England, his Shakespearean studies and travel experiences have sculpted his eloquent poems, which range from political diatribes to personal reminiscences about his family and the aftershocks of the two World Wars.

American author Thom Locke, best known in Thailand for historical thrillers in the Sam Collins mystery series like “Jim Thompson Is Alive!”, puts his background as a historian and Thai-ophile to good use in a touching ode to a famous figure from Bangkok’s nightlife, Mama Noi, a bar hostess at the CheckInn 99, who also served as the consort of yesteryear celebrities like Bob Hope and Bing Crosby.

Another favorite of mine in the collection is the piece about comedian Doug Stanhope. He put on a brilliant two-hour show in Bangkok in early 2018. Kevin and some of his cronies had the pleasure of sharing some drinks and laughs before the gig with him. Onstage, Stanhope comes across as a bitter, black humorist. In person – and this caught me off-guard – he’s a stand-up guy who even shared some gifts from his fans with the Bangkok crew.

Kevin saves his most poignant piece for last. “A Short Story for Papa” sees the Californian turning a boyhood recollection of his grandfather, dying of emphysema, into a meditation on his own mortality that comes with a scorpion tail’s stinger at the end.

Now that the author has seemingly exhausted the Q&A email interview format, as well as the supply of expat authors in Thailand, the latter story could serve as a blueprint to map out his future direction in blogging and tale-telling.

Different Drummers is available as a paperback, or an ebook for a short time, on Amazon. You can also pick up a hard copy at the Queen Bee in Bangkok for 400 baht.

NOTE ON THE REVIEWER: Jim Algie is interviewed by Thom Locke in Different Drummers. The 2018 edition of his latest book, “On the Night Joey Ramone Died: Tales of Rock and Punk from Bangkok, New York, Cambodia and Norway” contains a new 130-page section of “Rock Writings and Musical Memoirs,” and a cover blurb from the acclaimed author Timothy Hallinan, “The funniest sad book and the saddest funny book I’ve read in a long time.” The book is available as a paperback or ebook from Amazon.com. 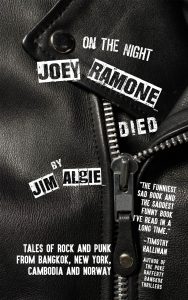 Cover of the revised and expanded 2018 edition.