22 Walks in Bangkok: A Book Review 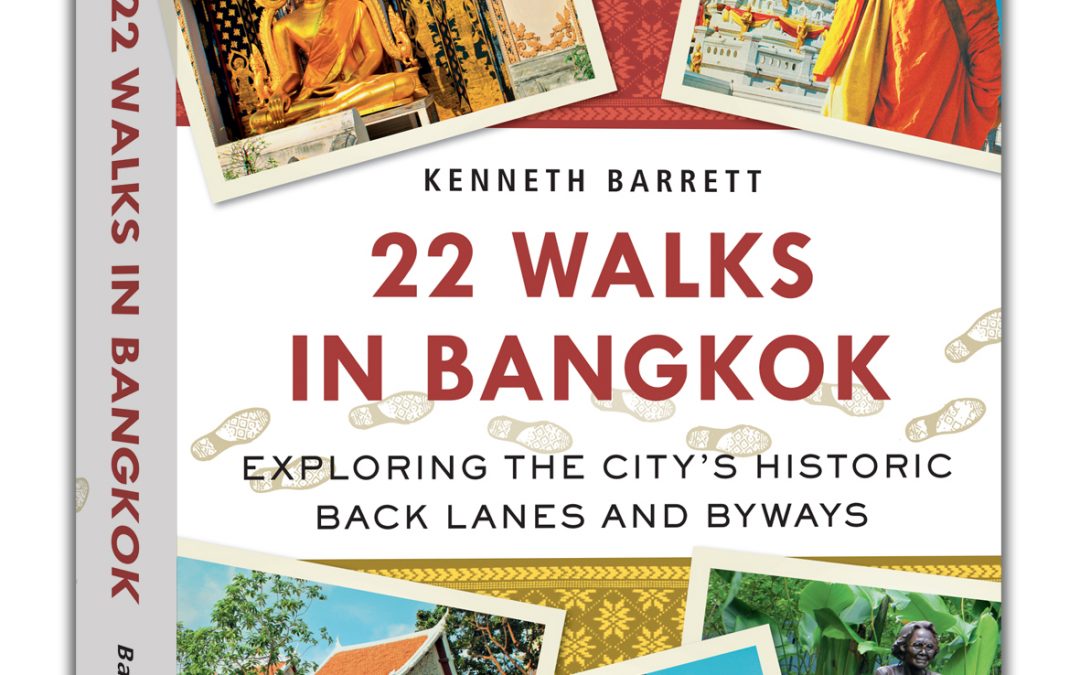 A new book maps out more than 20 walking tours of Bangkok that show some different sides and rough edges to the pedestrian-unfriendly capital.

Most visitors come away with the impression that Bangkok is not a city for walking. Vendors, stray dogs and food carts hog the sidewalks. Motorcycles drive down them. Cracks splinter them. And the crowds of people milling around them often transform walking into dodging and dawdling.

That’s why Ken Barrett’s recent book, 22 Walks in Bangkok: Exploring the City’s Historic Back Lanes and Byways, (Tuttle, 2013) is such a revelation.

With the aid of handy maps, color photos, evocative descriptions, and black and white illustrations, he reveals some old wrinkles and newer beauty spots on the capital’s timeworn face.

These walks in Bangkok (please try to remember the key words, I don’t want to have to repeat them again) will whisk you around the city’s most famous districts like Rattanakosin, to the less explored sites across the river in Thonburi, like the Princess Mother Memorial Park, and the area around the Santa Cruz Temple, where a few old bakeries still serve Portuguese desserts called khanom farang.

As any visitor knows, the capital is a city with tons of tremendous temples. These walking tours of Bangkok pay homage to quite a few of them: a few more than may be necessary. Lavishly described in exacting detail, these descriptions shine.

Especially helpful is the way that the author has decoded some of the more esoteric symbols along the way, such as the Pig Memorial to a member of royalty born in the Year of the Pig.

HISTORY GUIDEBOOK
The book’s balance is weighted heavily on the side of history; contemporary Bangkok is mentioned mostly in passing. That’s too bad. Some of the most fascinating anecdotes here are about Ban Bu, a community of bronzesmiths facing extinction, where past and present are on a collision course that defines Bangkok’s metamorphosis from a dumpy backwater to a mighty capital.

Also given short shrift are any personal encounters on the routes, as the author sticks with the omniscient point-of-view found in most guidebooks.

Barrett, a well-traveled journalist and long-time resident of Bangkok, prefers to cull his characters from history. These thumbnail portraits reveal some colorful – and in some cases off-color – characters. An example of the former would be Phraya Pichai, a general from the 18th century who gained the nickname “Broken Sword” for continuing to fight in battle even after one of his swords was cut in half. His image and legend is found all over Thailand.

An example of an off-color personage would be the Chinese brothel owner known as “Grandma Faeng” who funded the temple that King Rama V later named Wat Kanikapon, or Temple Built from the Earnings of Prostitution.

That walk through Chinatown, called “Along the Dragon’s Back,” includes a stopover at the Thian Fa Foundation. The group works closely with the Poh Teck Tung Foundation, also bastioned in Chinatown and also devoted to performing acts of altruism, like collecting unclaimed corpses and arranging burials for them.

Nai Lert, the entrepreneur who helped to develop the once swampy area around where the British and American embassies reside, and the engineer who lent his name to Sukhumvit Road, also receive nods and bio sketches.

FOOTNOTES FROM OBLIVION
Throughout the book, Barrett demonstrates a talent for rescuing a number of quirky footnotes from oblivion. One that springs to mind is about the new British embassy built in 1926, and the war memorial that preceded it, “The statue of Queen Victoria was transported to the site, (the statue was boarded up by the Japanese in World War II, but they thoughtfully provided a peephole so that Her Majesty would not be left in complete darkness.)”

Shoppers and souvenir-hunters will also find parts of these walks in Bangkok (don’t forget the key words, amnesiac reader) useful. That’s especially true when confronting the maddening mazes of Chinatown. To keep your blood pressure from surging, the author breaks down the area into the different kinds of goods that are sold.

I have had the chance to road test a few of these walking tours of Bangkok, so I can vouch that the info and maps are spot on. Beware that these are not the “turn right, cross the street” walking tours that Lonely Planet specializes in. Instead, walkers can remain footloose and fancy free as they improvise their own outings.

With 22 Walks in Bangkok, Ken Barrett has done an enormous service to visitors in opening up parts of the city to pedestrians eager to get a toehold on the capital’s beautiful blemishes, peculiar legacy and take some walks on the mild side.

This review originally appeared in a slightly altered form on the Travel + Leisure Southeast Asia website. Pick up a copy Ken’s book here or read an interview with him on the Tuttle website.