The Sexiest Thai Ghost Story of Them All 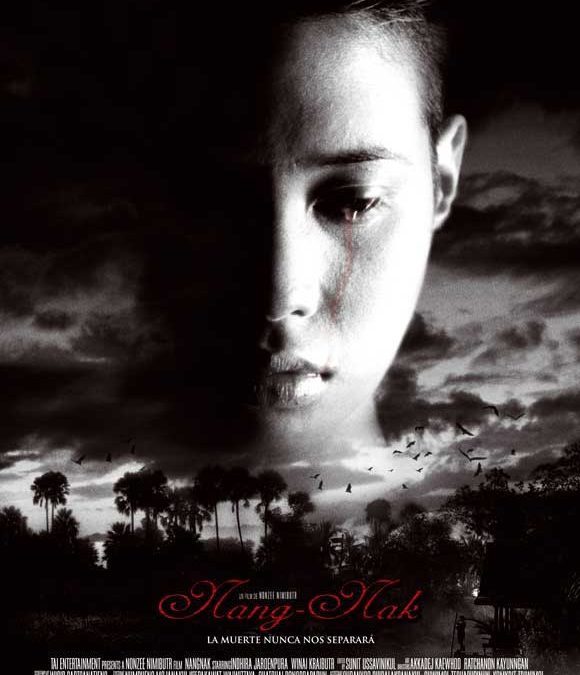 Without a grounding in the supernatural one is unable to understand the daily effects of Thailand’s ancient animistic culture. In this retelling of the infamous Thai ghost story Jim Algie untangles the historical truths from the fantastical legends.

The Thai ghost of a woman who dies in childbirth—a phi tai hong thong klom—is regarded as the most fearsome of all phantoms in Thailand. In a scene from Nang Nak—the famous Thai horror movie based on the country’s most enduring ghost story—a terrified widower and a group of Buddhist monks are sitting on the floor of a temple chanting mantras to protect themselves when drops of water begin falling on them. They all look up to see the man’s dead wife standing upside down on the ceiling of the temple, glowering at them while dripping sweat. 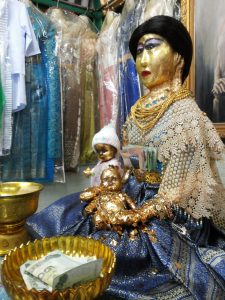 The main image of Nak at Wat Mahabut.

At Wat Mahabut (also known as the “Temple of Mother Nak”) on Sukhumvit Soi 77 in Bangkok, where many believe her spirit still resides, a Thai man pointed out to me a strange indentation on the ceiling of the main shrine, declaring that this was the place where Nak once stood.

Long before the Siamese even had surnames, the real Nak was supposedly born around here in the middle of the 19th century. The village of Phra Khanong, once a patchwork of rice paddies crisscrossed with canals—some of which have still not been paved over—later became a district of the capital.

As the legend and the 1999 film tell, her husband Mak went off to fight the Burmese, leaving his pregnant wife behind. When they were reunited, Nak showed him their newly born son. But Mak could not understand why she was so aloof and kept rejecting his overtures to make love.

SEX, DEATH AND REBIRTH
A few scenes later, when the couple are making love on the floor, the scene is edited together with a flashback of Nak dying while giving birth in the old Siamese way—sitting on the floor, her arms tied above her head, as beads of blood drip through the floorboards onto the head of a water buffalo tethered below the house.

Never mind the supernatural sex that left audiences around the world gasping and murmuring—“He’s sleeping with a ghost and doesn’t even know it!”—the scene was remarkable for the way it contained an entire revolution on the Buddhist Wheel of the Law: birth, death and rebirth.

Such deaths were common in Nak’s day. In the film and the rural legend, Nak went on a killing spree to keep the other villagers from exposing her secret to her husband. 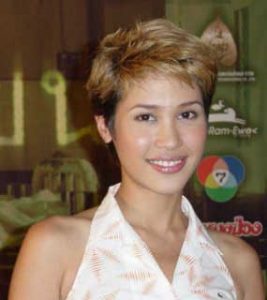 MEETING THE PHANTOM
After watching her frightful and tender performance on-screen it was a shock to see that, in real life, the cinematic reincarnation of the country’s most famous phantasm was a teenaged college girl with spiky tendrils of frosted blonde hair.

Only 19 at the time, Inthira ‘Sai’ Chareonepura radiated none of the menace she showed on-screen. Sitting in her school uniform of a black skirt and white blouse, beaming with smiles and politely answering questions, she could have been one of a million university students in the country.

Sai noted that Nak’s story has been made into more than 20 different films, but the 1999 Thai ghost story was different because it focused more on the couple’s relationship.

“The previous versions of Nang Nak are more about scary things and horror—not the love story. But the director [Nonzee Nimibutr] wanted to make this a love story about Nak’s faithfulness to her husband as she waits for him [to return from the war]. Even after she dies, she’s still worried about him and comes back to take care of him.”

That’s true. What made this version a cut above the usual slasher-and-horror fare is the full-bodied romance. The climax is especially heartrending when the couple is caught in the middle of a rainstorm while the Buddhist monk who moonlights as a ghost-hunter attempts to trap Nak’s spirit forever.

Even the most oblique and subtle questions about the infamous sex scene turned Sai into a giggling and blushing schoolgirl. “Yes, giving birth in the old way… that wasn’t me. They had a body double,” she said, before erupting in a gale of giggles.

Since this was the most controversial part of this distinctly Thai ghost story, it required an explanation. But my further questions were answered by more giggles and denials. Tiring of this typically Thai coquettish routine, I asked her point-blank, “So was that really you rolling around on the floor of the house?” 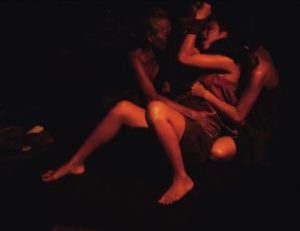 You would’ve thought that this was the funniest joke she had ever heard. Composing herself after another fit of hysterics, Sai managed to say, “Yes, that was me,” before explaining that many previous productions of the film were plagued with problems thought to have occult causes. That’s why cinemas once set up shrines to appease her spirit. One old movie house that did not follow this ritual was razed to the ground by a freak fire.

As was, and still is the tradition, the whole cast and crew paid homage to her restless spirit before they shot the film, at the shrine behind the temple where hundreds of devotees still go every day to seek blessings, winning lottery ticket numbers and especially luck in love.

That kind of reverence has paid off big time at the box office. Mae Nak loves filmmakers who keep her legend alive. In 2013, a blackly comedic and frequently slapstick version of the tall tale, this time told from her husband’s point of view. With more than a billion baht in box office sales, Phi Mak is the highest grossing domestic blockbuster of all time in Thailand.

Read more about this uniquely Thai ghost in the book Bizarre Thailand, or other takes on the Thai occult, in The Phantom Lover and Other Thrilling Tales of Thailand. and legend are here. 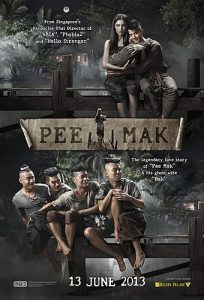 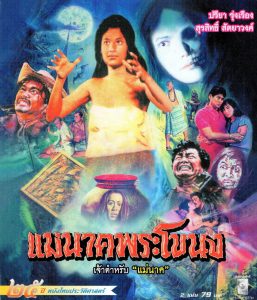 A 1959 version of the most infamous Thai ghost story.