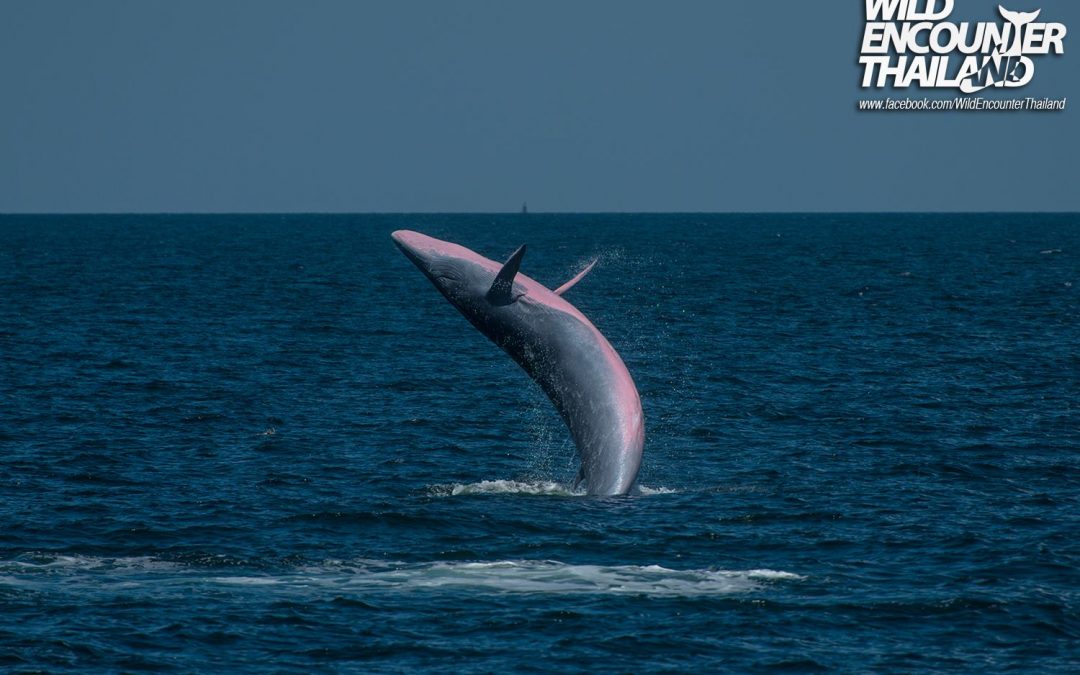 The pier of departure for whale watching in Thailand is only an hour from Bangkok. Text by Jim Algie. Photos by Jirayu Ekkul.

Few sights in the animal kingdom are more spellbinding than the sight of a Bryde’s whale breaking the water’s surface to open its cavernous maw, which remains agape for a minute or two, as fish try to leap out and seabirds dive and screech in a bid to snap up some live supper in mid-air.

That’s how these goliaths feed. Known as baleen whales, because they have baleen plates instead of teeth, this group of filter feeders includes the largest mammal that has ever existed on planet earth, and is severely endangered today: the blue whale, which has a heart that can weigh 200 kilograms.

Whale watching is a pastime many would associate with Alaska, Australia, or the Maritimes of Canada, but the Gulf of Thailand is a feeding and breeding ground for a resident population of some 40 Bryde’s whales. These leviathans, which are up to 14-meters long and 18-tonnes humongous, are the largest out of four marine mammals in the gulf, the others being the Irrawaddy dolphin, and two much rarer species, the finless porpoise and the Indo-Pacific humpback dolphin. 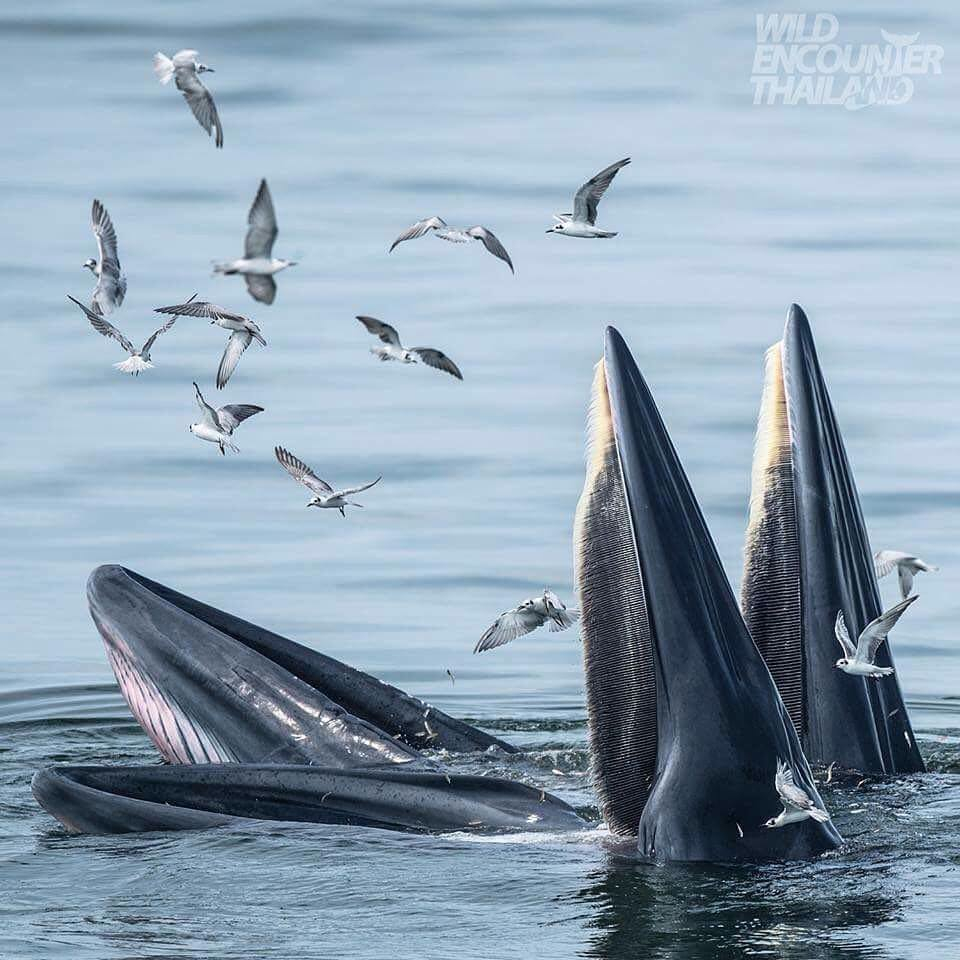 Wild Encounter Thailand is the only company that offers argosies to spot these cetaceans. The pier for their converted fishing trawler, which can accommodate up to 40 guests, from is only an hour from Bangkok in the coast-kissing province of Samut Sakhon.

From the first downpours of the monsoon season in May, until the end of the calendar year, the company does whale watching in Thailand outings almost every Saturday and Sunday. But the peak season for sightings is September through November, because that’s when the anchovies and other small fish the whales feed on are most plentiful. It’s also the time when they breach the surface most often.

The company’s founder and main guide is Jirayu Ekkul, a man with lots of experience both above and beneath the waves, as an underwater photographer, NGO worker and a consultant on sustainable tourism enterprises that aim to help locals navigate the high tides and shoals of launching similar odysseys in the kingdom.

Wild Encounter Thailand prides itself on being an eco-sensitive venture. For one thing, they do not use any electronic devices to track the creatures (all the spotting is done by eye) and they make the whale watching in Thailand tours as educational as possible. (“This is eco-tourism with a porpoise,” said Bangkok 101’s editor and chief punster, Bruce Scott.) 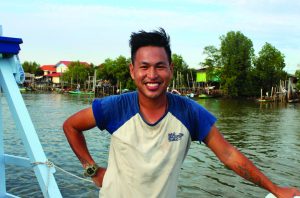 Jirayu, a fluent English speaker and self-taught expert in marine biology, begins every tour by briefing all his guests. First of all, he showed us a map of the Gulf of Thailand, with the five big rivers feeding into it, before giving us some historical facts about one of its largest inhabitants, the Bryde’s whale (pronounced “Brudas” after the Norwegian whaler who first discovered them only to promptly turn around and try to harpoon some of them.)

Jirayu said that these largely solitary animals tend to forage by themselves. The only pairs one is likely to encounter are mothers with their calves. At the age of two or three, already skilled in survival techniques, the calves will go their own way.

We were only 15 or 20 minutes out to sea and just getting past the last mussel farms and a small Buddhist temple on stilts, which serves as a stark memento to the perils of coastal erosion, when the crew spotted a small pod of Irrawaddy dolphins. Unlike other dolphin species, these hump-headed creatures have no beak. Unlike some dolphins, they are not renowned for their leaping ability, but they are incredibly fast swimmers, coming up to gulp down some air every minute or so, their whole bodies rising up out of the water in spumes of foam.

That scene whetted our collective appetites for cetaceans, a species that includes both whales and dolphins. But hours rolled by as we scanned the waves for more dorsal fins without a single sighting. 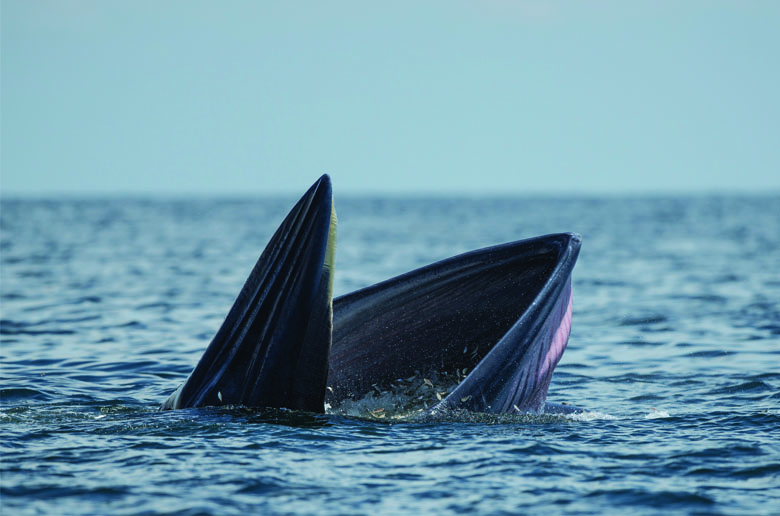 At least the scenery of deep green water and dark blue islands was good, the saltwater smells rejuvenating, and the sight of Bangkok, a tableau of matchbox buildings and toothpick spires, reduced this metropolitan madhouse where we live and work to a mere smudge on the horizon.

It was just after a Thai buffet lunch onboard when the excited cries of the crew had us scrambling to reach the bow. Some 20 meters away was the dorsal fin of a Bryde’s whale slicing through the water. Soon it vanished beneath the waves. Everyone had their cameras out, craning their necks to see where it would surface next.

With a hiss the whale spouted a fine mist of water as it resurfaced to draw another breath on the other side of the boat. Each time it breached, its grey back slide up and across the surface for perhaps a dozen seconds. So it was easy to catch a glimpse, but hard to take a decent photo, even though the whale swam around the boat for a good 20 minutes, surfacing at irregular intervals.

After that adrenaline burst of excitement, the next few hours drifted past in a relaxing torpor with many passengers taking a snooze, but no one laying an eyeball on any more whales. 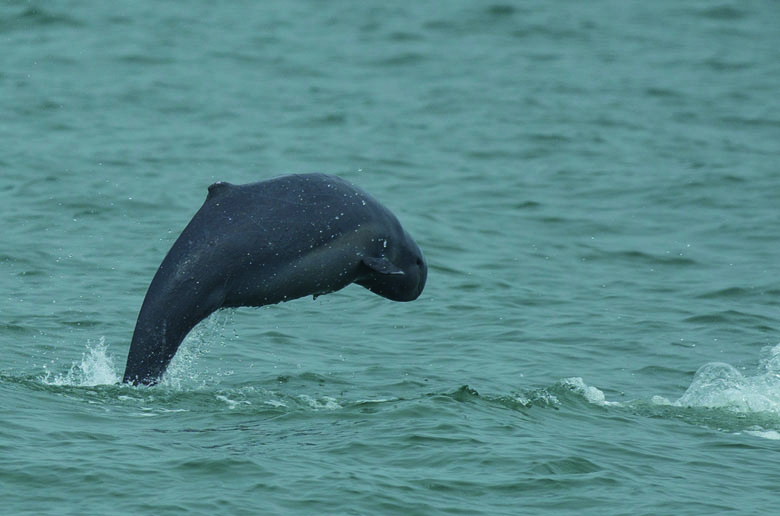 To make up for our disappointment, on the way back to port, a pod of perhaps 10 Irrawaddy dolphins burst from the waves in front of the boat. It was late afternoon, the horizon had darkened to deep blue, the sunlight coming down in shafts through the clouds as the dolphins streaked through the water, two or four of them breaking the waves at the same time to make the passengers coo with awe as if they’d just seen a firework flower across the sky, while we frantically tried to follow them with our viewfinders for a spectacular photo finish to our whale of a daytrip. 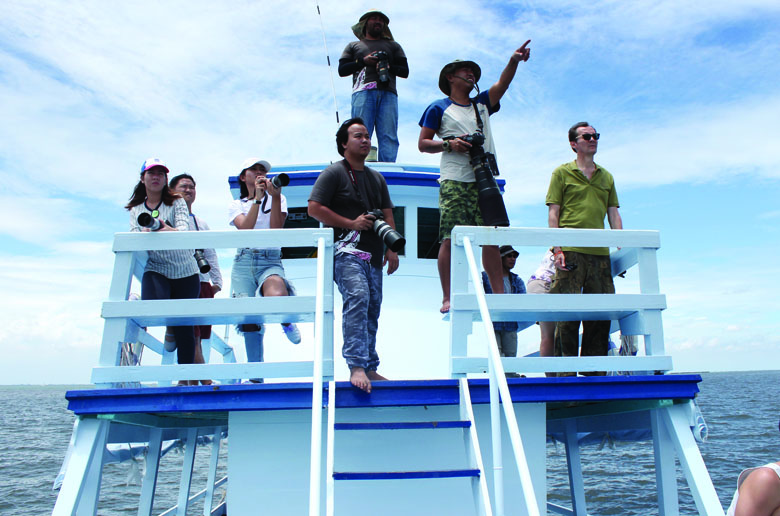 All aboard for whale watching in Thailand. Author Jim Algie is far right.

Jim Algie has written about rock and punk history, touring, recording, alcoholism, drug addiction, groupies and his own experiences as a musician, through these interconnected novellas about the life of a falling rock star trying to stage a comeback in the book On the Night Joey Ramone Died: Tales of rock and punk from Bangkok, New York, Cambodia and Norway,available from Amazon as an ebook for US$2.99, and now in an expanded paperback edition that includes a 130-page nonfiction bonus section of “Rock Writings and Musical Memoirs,” including autobiographical pieces like “My Close Encounters with Rock Stars” (Joe Strummer, the Pixies, Pearl Jam, Soundgarden, Ice-T and Leonard Cohen, as well as “My Last Show and Worst Onstage Disaster” that chronicles the musician-turned-author’s near-death experience at a gig in Berlin. The paperback is available only from Amazon for US$12.99.

The expanded and updated edition, released in February 2018, includes a new front cover blurb from the renowned author, former singer and hit songwriter, Timothy Hallinan: “The funniest sad book and the saddest funny book I’ve read in a long time. The book also captures the pop music world as well as, and in some cases better than, most rock autobiographies.”