The Railway Man Tracks Some Dangerous and Familiar Military Turf 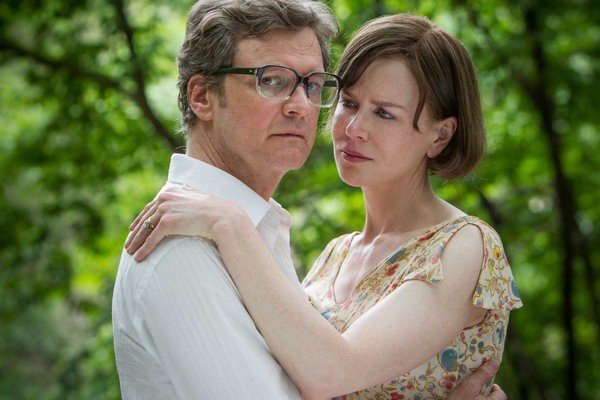 War stories are not like other period pieces or memoirs or history books. Army uniforms go out of fashion. Bombers rust. Armaments turn obsolete.

But the nature of warfare, rooted in the most primitive tribal instincts that pit country against country and man against man, does not change very much.

The Railway Man may be set during World War II, but it feels as up to date as your newsfeed:  the latest mortar attack in Syria, the most recent Russian transgression in the Ukraine, the still-echoing uproar over the Tiannemen Square museum opening in Hong Kong, and the months-old uncovering of a World War II bomb in Bangkok that exploded when workers tried to salvage it for scrap metal, killing a half-dozen people.

The film is based on a 1996 memoir called The Railway Man by Eric Lomax, a British railway engineer who became a POW after the Japanese forces overran Singapore. The POWs were then transported by railways cars to Kanchanaburi in Thailand to help build the so-called “Death Railway.”

This was one of the most deluded-on-an-epic-scale feats of engineering ever attempted: to tunnel through rocks, mountains and hardwood forests to build a railway that could connect Southeast Asia with India to help the Japanese occupiers eventually meet up with the other Axis powers.

It’s been almost 20 years since I read the memoir, and some details are out of focus, but I can still see that the director and screenwriters have taken some liberties. Fleshing out the love story between Lomax (Colin Firth) and Patti (Nicole Kidman), who meet on a train many years after the war, is one of their main changes.

The chemistry between them is genuine, in spite of the fact that the Canadian nurse is 17 years his junior, and the humor is gentle. After their first kiss she says that it’s the first time she has ever kissed a man with a moustache, and it’s an experience she hopes never to repeat. Lomax meekly asks what if the man happened to shave his moustache?

ARMY OF GHOSTS
After their marriage is when the clean-shaven Lomax begins to go off the rails again. He keeps hallucinating about a torture chamber into which his Japanese captors are dragging him.

Patti knows something is wrong but he will not tell her anything. Back then the term Post-Traumatic Stress Disorder did not exist. Other terms once in vogue, such as “shellshock” and “combat fatigue,” do not suggest the level of psychological scarring that takes place under conditions of extreme torture. (Beneath the narrative floats a submarine carrying prisoners from Guantanamo Bay and Abu Graib.)

Lomax’s manly code of silence also makes The Railway Man feel very contemporary. It’s only when Patti makes friends with another former POW named Finlay, who heads up a group of local veterans, that she begins to find out what happened during the building of the railway.

Those scenes, shot on location in Kanchanaburi, with coolies digging out the railway line with pick axes, and other POWs laboring under the glare of torches at night in Hellfire Pass, are incredibly detailed tableaux of World War II history.

Kidman may be the film’s heart but Stellan Skarsgard as the older Finlay is its psyche, bruised and haunted. To Lomax he utters the film’s most poignant lines about these former POWs who are still at war with themselves and their invisible tormenters. “We can’t live. We can’t love. We can’t sleep…. we’re an army of ghosts.”

After all, it’s hard to cuddle up with an ideal like world peace – or a copy of Aristotle’s Poetics.

In war stories, the redemptive power of love is a familiar motif. It’s like a guitarist playing a series of power chords around D, A and G major. Every rocker has used them. We’ve all heard them over and over again.

All I’m concerned about is how much passion and gusto the musician can put into those familiar riffs. Just the same, in war stories all I’m interested in is how well the screenwriters and actors can collaborate to stoke the passion without watering down the sentiments with too much weepiness.

The Railway Man is extremely emotional at times, but it does not get overly maudlin.

Director Jonathan Teplitzky’s restraint is evident when the couple is in bed together. Lomax is sprawled out face down on the bed. Patti sits beside him. They are not even looking at each other when she asks him why Finlay has died.

“Because he didn’t have you” is Lomax’s deadpan response.

It’s the kind of subdued scene that will not endear the film to lovers of Hollywood melodrama, but plays true to the protagonist’s English roots.

HARROWING REUNION
The narrative thrust of the memoir is supplied by Eric Lomax and Takashi Nagase (deftly played in his older days by Hiroyuki Sanada) is getting back in touch years after the war. Then they exchange a series of letters to air their grievances and share their memories of the war.

As touching as some of these letters are, they could not possibly be filmed as a series of voiceovers without losing their dramatic intensity.

On the battlefield of cinema, inevitably there will have to be a showdown between the two.

These scenes are electrifying. Lomax sizzles with anger whereas Takashi is more reticent, more Japanese, and less likely to provoke a confrontation. Only these two men can understand what happened in Kanchanaburi. Only they can use those experiences as pickaxes to grind each other into the dust or to question the nature of duty, of repentance, of the boundary lines between warfare and war crimes.

Best of all, either on screen or in a novel or memoir, The Railway Man details one of the most unorthodox ‘relationships’ between a tormenter and a victim that has ever been chronicled.

For those unfamiliar with the book, or who have not seen the film yet, I won’t play the spoilsport, but one of the key lines from a real letter written by the POW to his interrogator – “Sometimes the hating has to stop.” – sets the stage for one of the year’s most moving movies, and the best foreign film shot in Thailand for many years.