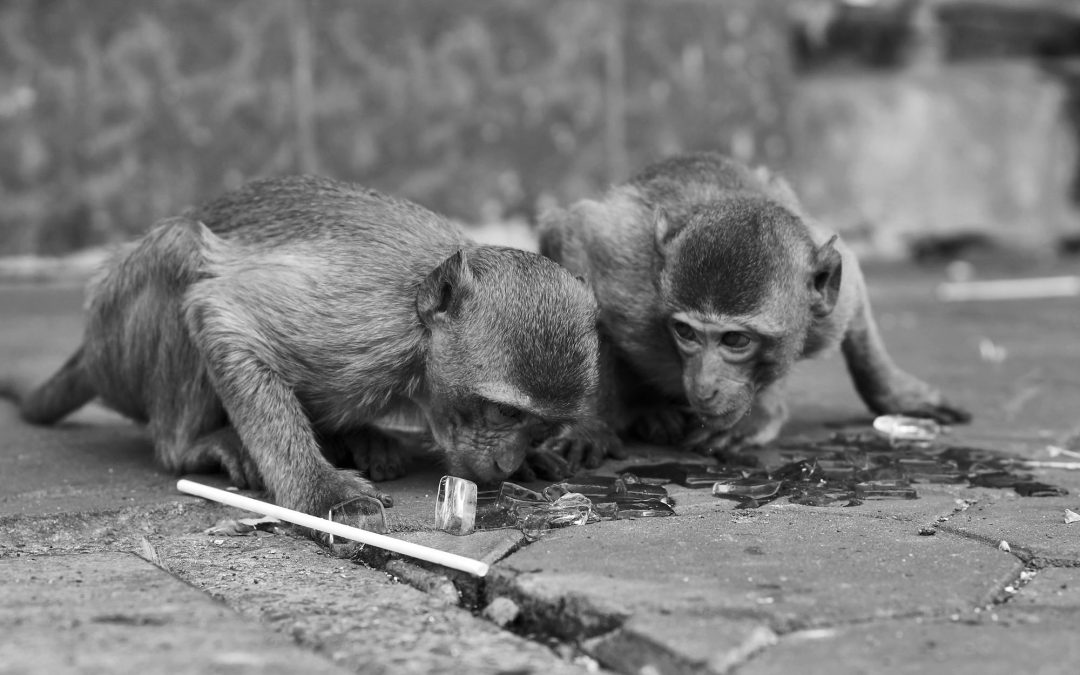 The monkey scampered down a power pole and scurried past a convenience store, a gold shop, and a tailor. Then it snuck into a Chinese pharmacy. Behind the counter, the macaque snatched several bottles of cough medicine off the shelf and ran back outside, where it drank one of the bottles. Several minutes later, the monkey fell asleep on the street. A car swerved around it, narrowly averting a head-on collision with a motorcycle, but ran over its tail.

In Lopburi, 160km north of Bangkok, the city’s 1,000-plus population of monkeys are both miscreants and mascots.   Some locals believe the animals are godsends from Kala, a Hindu divinity who supposedly holds sway over time and death, because many of them live around the 10th century, Khmer-style shrine devoted to him.  But for most, they are nothing more than pests and petty thieves. 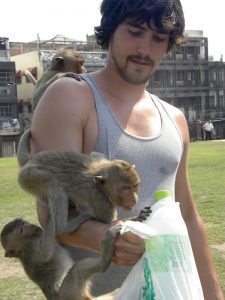 Lopburi monkeys are a handful

HOSPITAL FOR LOPBURI MONKEYS
The world’s first Monkey Hospital, located in the city’s zoo, provides first aid and retraining for rogue primates, like the one whose tail had to be amputated; but it’s also helping to spin some positive public relations for these victims of bad press by proving they have other uses, too, like helping the blind.

The gist of the latter programme, the first of its kind in the world, came about by accident.  One of the soldiers who volunteers at the hospital noticed that when he put a rope around the waist of a three-year-old female macaque named “Cindy,” she liked to stand upright and lead him around.  Manad Vimuktipune, the president of the local branch of the Wild Animal Rescue Foundation of Thailand (WAR), saw this and thought they might be able to use monkeys as a substitute for seeing-eye dogs.

One of the main difficulties in training the Lopburi macaques is that “they have short-term memories. That’s why we have to use short verbal commands and repeat them constantly,” says Manad, 47. As he speaks, a young nurse scoops up a two-week-old monkey running around at his feet, and feeds it milk from a baby bottle.  Meanwhile, an older macaque whose back legs were paralyzed in a fall from a building propels itself around on the tiled floor by using its arms.

After they trained her for several months at a local school for the blind, Cindy passed her first big test by guiding a blind teenager through the city’s downtown.  Since then, she has appeared on national TV in Thailand, and put on a royal command performance for the Thai Princess Chakri Sirindhorn.

She has also become the role model for a small group of baby macaques, who are orphans and live at the Lopburi Zoo, where Cindy performs on a daily basis in order to draw visitors to the zoo, and raise desperately needed funds for the programme, as the cost of training a seeing-eye monkey for the necessary two years is a minimum of several thousand dollars. 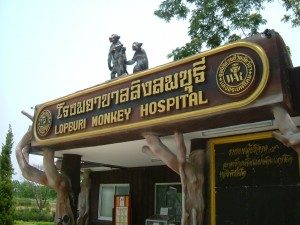 REHAB FOR WAYWARD MACAQUES
The Monkey Hospital also functions as a kind of rehabilitation centre for wayward macaques.  At the hospital, they receive quite a few phone calls from irate citizens about monkeys breaking into their homes, stealing their food, and even biting them, says the head veterinarian, Juthamas Supanam. When this happens, the hospital uses some of their volunteers – paratroopers from the nearby base for the Royal Thai Airborne, armed with tranquilizer darts – to track them down.

It’s an exasperating task, she says: The creatures are so agile and clever that they often make monkeys out of their pursuers by pulling the darts out of their flesh and scampering away.  Being pack animals with a ferocious loyalty to their kin, the other monkeys, seeing one of their own in trouble, will race in and try to bite the paratroopers with teeth as sharp as broken-glass shards.  Often it takes 10 soldiers to round up one of them. The naughtier Lopburi monkeys are castrated to nip their delinquency in the bud.

The old section of Lopburi, studded with ruins from the Khmer empire and a 17th century palace, is a breeding ground for three different species of macaques: the pigtail, the rhesus, and the crab-eating variety.  They have been living around here since the late 17th century, when Lopburi was Siam’s second capital.

The monkeys are divided into three different factions: those who live at the Phra Prang Samyod Temple and sleep on its roof; those who roam free around the nearby Phra Karn shrine; and their arch enemies, who dwell on the streets nearby and sleep on the tops of apartments and Chinese-style shop-houses.  They are all extremely territorial and turf wars often erupt between the rival factions.

For pulling in tourists and daytripping Thais, the animals have been a boon for Lopburi’s economy.   On any given day, you can watch visitors gawping at the creatures’ high-wire antics on the streets, or having their photos taken with them at the shrine.  The youngest macaques are the naughtiest.  It’s not unusual to see four or five them leap on the back and shoulders of a tourist, or even a monk.  They don’t usually bite, but they are renowned for picking pockets and stealing sunglasses and cameras.

As a tribute to the Lopburi monkeys that are the town’s mascots, the authorities prepare a buffet of fruit and vegetables for them on the last Sunday morning of November every year.

This wacky tribute often turns into a few-hour food fight between the macaques, who sometimes pelt a few tourists with their foodstuffs. To prevent this from happening local authorities have started putting the fruit and veggies in blocks of ice, so that the monkeys have to lick and scrabble their way to the goodies and visitors have some great photo ops, with the Angkor-style shrine in the background. This tribute is also symbolic of the respect Thais have for the Hindu monkey god and warrior, Hanuman.

The naughtier Lopburi monkeys are castrated to nip their delinquency in the bud.

SACRED SIMIANS
The Lopburi monkeys are fearless and frolicsome.

One of the Monkey Hospital’s main fund-raisers and benefactors is Phra Khru Udom Prachthorn, the elderly abbot of the province’s famous temple Wat Phra Baht Num Phru; he is well-known across Asia for his work at the temple’s hospice for AIDS patients.

When one of the macaques dies, or a local brings in one that has passed away, the abbot presides over a special cremation ceremony at the hospital. Like at a real person’s funeral, he does droning, Buddhist chants and wishes the creature a speedy trip to heaven.  After it has been cremated, the ashes are put in an urn, and buried in the hospital’s special graveyard for simians.

“Some Thais believe,” Manad explains, “that monkeys will become humans in their next reincarnation.  But the abbot also says that in real Buddhism you must make merit and do good deeds for everyone… the rich, the poor, and animals, too.

VISITING HOURS
The hospital is located in the Lopburi Zoo, and people are welcome to visit from 9am-4pm, daily. Admission to the hospital is free, though donations are accepted.

A longer version of this story is available in the the non-fiction collection “Bizarre Thailand: Tales of Crime, Sex and Black Magic” from Amazon.com