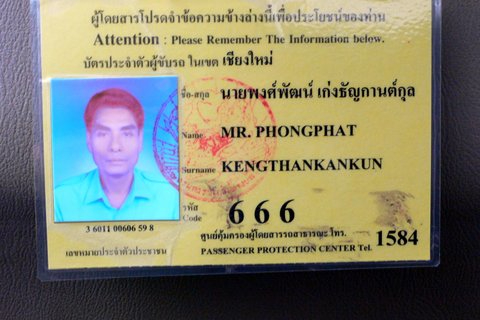 Of all the Bangkok expat tales of the 1990s, this anecdote of a Western guy who dared to mouth off and take on an abusive Thai taxi driver is the stuff of urban legends

What resident or visitor has not at one time or another wanted to smack or berate a Thai cabbie for a variety of offenses? Refusing to take you somewhere, refusing to use the meter and quoting you an outrageous fare, driving too fast, driving too slowly or stupidly, for being rude or drunk… the litany of complaints is as long as an Englishman’s face in the winter rain of London.

But one man dared to settle a score with a surly cabbie and the anecdote lingers on as one of the most popular Bangkok expat tales of the ‘90s. Almost an urban legend of sorts, it’s been recounted so many different times by so many different folks that it’s inevitably been retouched on occasion or embellished with a few falsehoods. Since I once knew the man in question and questioned him about one of the more quintessential Bangkok expat tales more than a few times, this version is one for the record and the history books.

Nobody gets a nickname like “The Biffer” for being a wallflower. True to his given moniker, after downing a few pints, he was prone to arguments and not averse to the occasional flurry of fisticuffs. Otherwise he was a very polite and articulate guy, well traveled and well read, or we would not have put up with his Mr. Hyde side.

On one inebriated evening down at Thaniya Plaza (the Japanese strip of upscale hostess clubs) and Patpong (the dying bazaar of bogus knock-offs and bedroom farces) he was trying to hail a taxi. Some cabbie quoted him an inflated price. The Biffer slammed the door and stormed off. After jumping into another cab, as they drove past the other cabbie, Biff rolled down his window and gave him the finger. The gesture and his contemptuous grin drove the cabbie into a fast and furious rage that went from zero to 100 in a few seconds. Barreling down Surawong like he was in a car chase scene, he caught up to the Biffer’s cab and cut them off at a red light.

He got out of his green and yellow vehicle. Seeing him opening the trunk of his taxi, the Biffer ran over to confront him. The cabbie whipped out a tire iron and tried to smack him with it, but surprisingly agile for such a brawny guy, the Biffer ducked it and jumped up to grab his wrists with both hands. As they grappled and grunted, trying to knock each other off balance on a dark street stained with orange streetlights and the shadows of trees, they stumbled towards the curb and fell into a traffic cop sitting on his motorcycle. Both the cop and his bike hit the ground. Fortunately for the Biffer, he spoke excellent Thai. So they argued their cases to the traffic cop, known in Thai slang as hua ping pong (ping pong ball heads) because of their white helmets.

Here is where the different retellings of this folkloric tale differ. Some say that the cop and the Biffer hit it off( and drove the cabbie into a dark soi, where they kicked the snot out of him and divvied up the contents of his wallet. Others claim that in fact it was the cabbie and him who made up and, to toast their new friendship, they went out drinking and brothel-hopping together.

Still other farangs have put a more diabolical spin on the story. In these other Bangkok expat tales, the Biffer’s blows knocked a screw loose in the driver’s cerebral carburetor. Ever since he has held a grudge against white foreigners, rips them off whenever he has the chance, and to scare the bejesus out of them, has dyed his hair as red as Lucifer and uses the Satanic driver’s license number 666. For years I wrote this Bangkok expat tale off as apocryphal. Now I’m forced to conclude that it may be the gospel truth.

Only recently did my friend Don Linder, who wrote the screenplay for the terrific biopic The Last Executioner, send me this photo. No Photoshop involved, folks. This is the real unaltered deal. 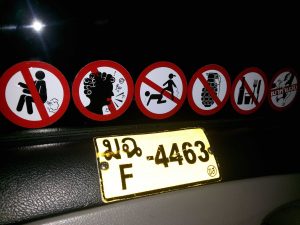 YELLOW LIGHTS and EXPAT TALES
Before any of you start thinking of emulating the Biffer’s macho antics, please heed the yellow light of caution and slow down a little. Only 18 months ago a middle-aged American executive, stuck in a rumbling traffic jam on Sukhumvit and about to blow a gasket of frustration, got out of a taxi after refusing to pay, and found the driver chasing him down with a samurai sword. The cabbie slashed him a few times. As another friend of mine said, “Imagine lying there bleeding to death and thinking, I’m gonna die over 50 baht.’ Bloody stupid if you ask me.”

I have had a couple of near-death experiences in Thai taxis myself. The worst incident was in 1995 when catching a cab home with an outspoken farang woman who, upon arriving at her house, swore at the cabbie for taking the long way home and ripping us off. Exasperated by the communication barrier and his insipid smiles and laughs, she screamed, “Fuck you!” at him to drive her point home with the sledgehammer of an exclamation mark. He understood that perfectly well. He reached under his seat, came up with a gun and pointed it at her. “No, fuck you!”

A tense standoff ensued, the air charged with ions like an electrical storm was on the horizon. My levels of sweetness and charm and Thai fluency tend to spike when confronted with firearms. Some fast talking and easy grins defused that threat.

Unless you’re as good with your fists and Thai tones as the brawler in question I would steer clear of such altercations.

Speaking of the hero of this most infamous of Bangkok expat tales, he disappeared from the city some years ago. Ever since I’ve heard stories about his reappearance in places as far-flung as Africa, where he’s supposedly gone straight and works for Save the Children, to Venezuela where he may be toiling for the Ministry of Transport. I hope it’s the latter. If anyone can right some serious wrongs in the third world of public transport it’s this fists-on pugilist – possibly the only farang who can lay claim to revenging himself upon a Thai cabbie and living to let me tell the tale.

im Algie’s latest book, “On the Night Joey Ramone Died,” is a story of one middle-aged musician’s mid-life crisis, as well as a collection of the author’s most famous music stories. The book is available on Amazon as a paperback and ebook.