“People are a lot like snakes. They’re very fast and tricky, and you can never predict how harmless or dangerous they might turn out to be.”

So reads the final line of the first story in Jim Algie’s anthology The Phantom Lover.

It’s a great line, not only because it ties together that first story while also setting the tone for the rest of the book’s tales, but because it extends further into real life — it’s hard to accurately judge the characters you meet here in Thailand. No one is quite what they seem.

The same could be said for Algie’s book as a whole.

There’s a certain predictability about books written by Thailand expats.

While the quality of these novels can be high (although are often not), the familiar roll call of violent murders, faceless Bangkok bar girls, cynical ex-military male protagonists and a couple of local Thai sidekicks can wear a tad thin after a while.

I’ll admit I was expecting more of the same. While Algie is well known in literary circles for his excellent Bizarre Thailand, published back in 2010, I hadn’t (yet) read it and assumed from the dark, brooding cover of the Phantom Lover — complete with creepy Halloween-esque mask and a heavily painted beauty — that it was setting the reader up for another journey of predictable murder-mystery.

But, happily, I was totally wrong.

The Phantom Lover is a collection of short stories that are probably better described as intricately detailed character sketches.

While they can stand alone as singular tales, Algie’s craft is really on display as he builds links between the stories, allowing the crossovers to slowly creep into the reader’s consciousness, weaving a web of characters, themes and plot points that share and reflect with and against each other, slowly building up to the crescendo: the final story, the epic “Tsunami”.

Author of the Phantom Lover collection, Jim Algie, at the Phuket Snake Farm interviewing snake handles as research for the first story in the collection.

This is a dense tome that works on a few levels: firstly, on the strength of its gripping storytelling, then on finding and appreciating the way that Algie spins his tales together, and finally as a presentation of themes and ideas that reflect the many layers of what it means to live in Thailand.

We’ve met Algie’s characters before — they walk among us. There are no heroes here, just the unendingly normal and stagnant characters that make up Thailand’s rich tapestry.

There’s Yai the snake handler, filled with self-loathing and a longing for respect; sometime prostitute Watermelon, struggling to balance her past experiences with her needs in the present; photographer Kendall, haunted by the memories of his past mistakes; See Ouey the cannibal, who lives out his crimes in the embodiment of a dark, God-like force; and the enigmatic Yves, a true lost soul.

Spirituality and karma, such cornerstones of Thai identity and experience, weave their way through every story of Algie’s, providing both cultural context and a question for the reader: where does reverence for the spirit world cross the fine line of sanity, and descend into madness? 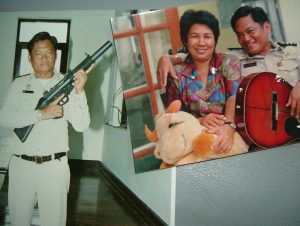 The story “Life and Death Sentences” is based on the real life of Thailand’s last executioner Chaovaret Jaruboon, who was a drinking buddy of Jim Algie.

Lack of mental clarity is another long-running theme — and one that’s easy to spot outside of Algie’s book in real time Thailand too. These characters are either bound up in the memories of their past or obsessed with the risks in their future. They’re so inward looking that they’ve lost all grip on present reality.

Algie’s characters are drawn so rich and appear so real that it’s hard to turn away. In creating such vivid and believable lives, the author delivers a profound lesson in humanity: there are no good or bad people in this world, just actions that create good or bad consequences.

While the overall tone of the book is struck somewhere between thrilling and despair, The Phantom Lover is above all an incredibly entertaining read.

In the wonderfully named “Wet Nightmares” story, we meet Watermelon working in the Hot Pussies Go-Go Bar, for instance. While Algie paints the picture of the tragic story of a Thai prostitute, he peppers her story with entertaining shades of grey that highlight the absurdities of life that we all face — whatever our chosen profession.

During an encounter with a client, Algie writes:

Watermelon spurred on his fantasy with a series of sighs, cresting on each breath as she moaned, “Oh yeah… oh yeah. You hit my G-spot,” like an actress repeating lines in a stage play she’d performed dozens of times, while wondering what she would have to eat afterwards (the sweet green curry or the rice noodles with fish balls?). And which pair of flats would go with the new top she’d bought today. 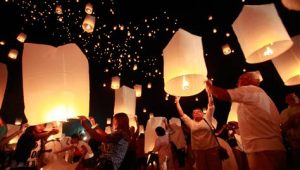 Launching hot air balloons to honor the dead of the 2004 Asian tsunami in the final novella. Photo by Victor Snepts.

In “Obituary for the Khaosan Road Outlaws and Imposters”, Algie introduces us to poetic reluctant criminal Yves, a particularly astute observer on expat life in Thailand.

On the travellers passing daily through Khaosan, he reflects:

In one crucial respect, all of us foreigners were pretty much the same. Everyone was either running away from something or someone, or trying to find some kind of new life, a new love, or just a life-altering adventure.

And he’s right. Who amongst us wasn’t looking for transformational change when we moved to Bangkok?

Yves also speaks about the open delusions that many expats and tourists enter into when they step off that plane at Suvarnabhumi.

“It’s a hypnotic, toxic cloud that fogs your eyes, dulls your senses, contaminates your memories and turns them into lies: You know, I think number 47 from Super Pussy actually likes me.”

And on the bar scene in general:

“A couple of those bargirls were so unresponsive they made me feel like a necrophiliac.” 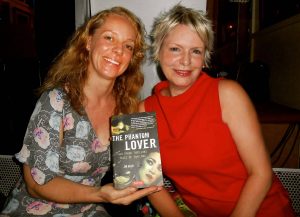 The finale of The Phantom Lover is the final story, “Tsunami” — a sweeping tale weaving together many of the preceding stories and characters as we watch the fall-out from the 2004 Indian Ocean tsunami in Khao Lak.

Again, this is real life: people die, people break down and people move on. New characters move into the narrative and older ones move out. Time passes. It’s an epic conclusion.

The Phantom Lover is an incredible book that satisfies on both the first and subsequent readings — there’s always something new to find and appreciate.

If you’re a reader looking for something that goes further than many of the classic Thailand expat murder mysteries, you’ll find something special here in Algie’s The Phantom Lover.

The collection is available on Amazon as an ebook or paperback.