Rush Out to See This Formula 1 Flick 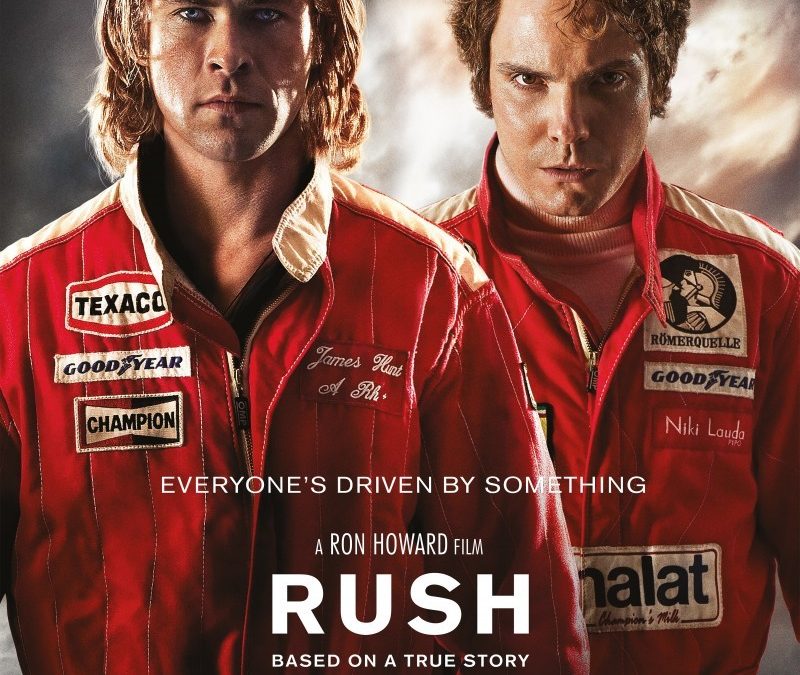 Miles ahead of the competition in the sports-film sweepstakes, Rush is one of the best movies to come barreling down the straightaway in many years.

One of my first ambitions in life was to race stock cars and be a Formula 1 driver. Most of the models I built as a kid were of racing cars. On TV we watched the Indy 500, the Daytona 500 and the Le Mans Grand Prix. After school we raced our bikes, our skateboards, our gas-powered funny cars. For fun on weekends we went to see drag races, demolition derbies and stock cars ripping around the Westwind Oval, about 20 k outside of my hometown of Edmonton, Alberta in Canada.

At the age of 12, the first novel I wrote was about the Indy 500 of 1972. My hero was Jim “Hercules” Hurtubise, a stock car driver who was also one of the last front-engine drivers to try and qualify for that race. He did not make the cut. But in my book he came from behind to win the race. Thus began a life-long affection for underdogs and motor sports. 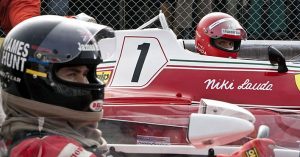 Rush details their rivalry during the dramatic 1976 Formula 1 season

WHAT A RUSH
I have never seen a film which whipped up that whirlwind of memories and adolescent ambitions like Rush did. On the surface, the forward thrust of the narrative seems straightforward enough: a recounting of the rivalry between arch-enemies James Hunt and Niki Lauda during the 1976 Formula 1 season. In reality, the story is full of hairpin turns and serpentine twists worthy of a Grand Prix raceway.

The Brit and the Austrian were bi-polar opposites, Hunt the cigarette-smoking, hard-boozing serial-shagging Casanova, and Lauda the cunning mechanic and tactician who claimed that a 20% risk factor was acceptable.

Near the beginning of the film, in a voiceover, Hunt explains why women are attracted to Formula 1 drivers. “We are close to death and that makes you more alive.”

It’s the kind of shrewd psychology which puts this film out in front of the many movies about athletes. Lauda is also put under the microscope by screenwriter Peter Morgan. In explaining the driving force behind this man’s character – the son of rich industrialists who bought his way into Formula 1 when his parents would not bankroll him – after his marriage to a German woman, and a few scenes of them enjoying their honeymoon in Spain, she wakes up in bed alone and finds him staring out into the night. Lauda says, “Happiness is the enemy.”

His new bride, with a sad and pitying look on her face, says, “Then you’re already lost.”

Directed by Ron Howard, this vehicle for Daniel Brühl (Lauda) and Chris Hemsworth (Hunt) is also commendable for not playing favourites. Sometimes we’re not sure who is supposed to be the good guy and who is the villain. These lines blur even more after the near-fatal accident that is the film’s equator.

The climactic scene on a rainy raceway in Japan should even lube the driveshafts of the Fast and Furious fans. 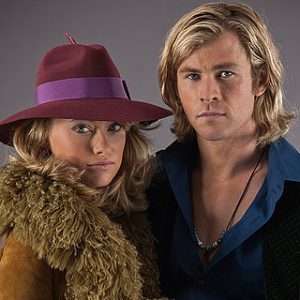 Hunt with first wife Suzy Miller, a famous model of the time, who famously left him for actor Richard Burton

TRUE OR FALSE?
After seeing Rush I was eager to find out how closely it sticks to reality. The answer is very close. Take a look at this article in The Guardian to look at some of these differences. The biggest one is that in real life, the handsome Brit and the rodent-faced Austrian, were not the archenemies they are portrayed as here. In fact, they were even roommates for a while.

In a recent interview with Niki Lauda he said how accurate the film is, and how Daniel Brühl nailed his accent and mannerisms.

After watching a few old clips of James Hunt in action, I came to admire Chris Hemsworth’s portrayal in Rush, as a playboy and lifelong adolescent with a charming wit and disarming frankness.

This clip is especially funny. When the reporter asks him what it means to win a grand prix, Hunt said, “Nine points, 20,000 dollars and a lot of happiness.” He then asks someone in the crowd to hand him his cigarette. 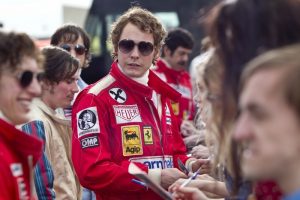 The real Niki Lauda was impressed by how well the actor impersonated him.

WHEN PLAYBOYS RULED OUR WORLD
Can you imagine a famous athlete behaving like that today? No way. Not a chance. There are too many sponsors to suck up to – too many million-dollar endorsements to squander.

That is the subject of a powerful and satirical British documentary called When Playboys Ruled Our World. A biosketch of both Hunt and motorcycle champion Barry Sheene, the show details their friendship and how they lived like rock stars: drinking, partying, snorting coke, and in Hunt’s case, sleeping with around 5,000 women. Their lives are juxtaposed against the lives of modern-day sporting superstars, such as Tiger Woods and Wayne Rooney, who were brought down from their god-like plateaus by sex scandals that showed them to be men of flesh and blood with sex drives in fourth gear.

He’s right. Most of us don’t have the nerve. I didn’t. That’s for sure. I never even did very well racing go-karts.

But when I get to see movies and shows like these, and get to write about such death-defying daredevils, it’s a vicarious rush that brings along a raft of memories caught in its slipstream. While it’s far from the fast lane, the dashboard on my Mac is not what James Hunt called, in his famous description of Formula 1 cars, as a “a coffin on wheels.”