One Bloody Night with the Bangkok Corpse Collectors 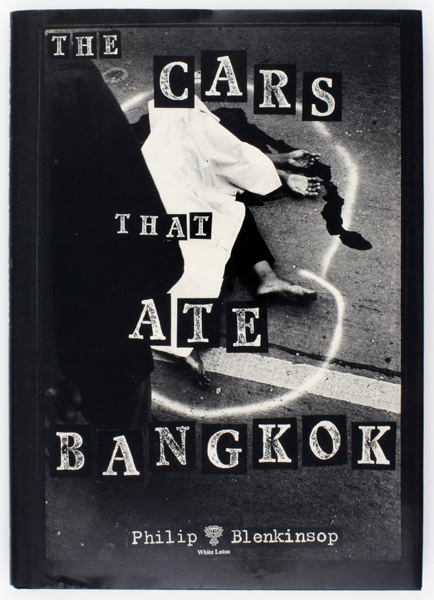 The rescue work of the Bangkok corpse collectors has been featured on the BBC, CNN and National Geographic TV, inspiring books like The Cars that Ate Bangkok by Philip Blenkinsop and a chapter in Bizarre Thailand, which is where this extract comes from.

Poh Teck Tung pulls in millions of baht in donations every year. Donating to the organisation is good karma, says the videographer, who asked not to be named, as we weave through Friday night traffic, because they help to rush the injured to the hospital and take the dead to the morgue. They also arrange coffins and funerals for the poor. If nobody claims the body, they bury the remains at their cemetery in Samut Prakan province. Every few years, dozens of volunteers help to unearth and burn the bones of thousands of corpses in a mass cremation ceremony.

The foundation’s rescue work on the blood-slicked streets of Bangkok has been documented by National Geographic TV, the BBC and CNN. When the latter network attempted to follow them around one night, their van crashed and Poh Teck Tung had to come to their rescue, the videographer says with a smug grin. It’s an apt warning for the kind of driving these speed demons do. When saving a life is a matter of minutes, speed is of the essence. 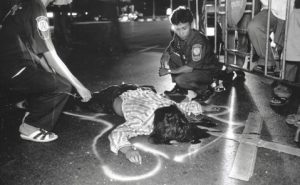 A call comes in on the radio, he guns the gas and we’re off, bulleting down the road like a getaway car. The speedometer needle, glowing green, creeps up… 40, 55, 80, 100. He’s too busy passing cars to talk now. And we have no idea what the emergency is.

Snapshot memories whizz by like the cars and lights. In 1997, I interviewed the photographer Philip Blenkinsop about his grisly collection of black-and-white photos, The Cars That Ate Bangkok. Many were taken when he travelled around with the Bangkok corpse collectors of Poh Teck Tung for a few weeks. The book is a horror-monger’s gallery of bodies lying in the street, surrounded by chalk-line skeletons and rivulets of blood, and close-ups of pulped faces. The most unforgettable image, however, may be a bloody hand hanging from the bonnet of a car, making it look as if the person has been eaten alive by what Philip refers to in the text as a ‘petrol-powered beast’. 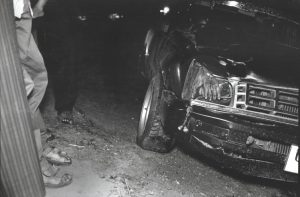 The stuff nightmares are made of for Bangkok corpse collectors

In reference to this image, the Australian photographer— who went on to win the World Press Photo Award and many others—told me, “An old woman was crossing the highway outside Bangkok when she was cut in half by a car, which was abandoned by the side of the road after the driver fled the scene. Her hand was left on the bonnet. It was unbelievably depressing.”

His experiences with the corpse collectors (sometimes called the “body snatchers”) had driven home the fact—and the fear—that road accidents are the leading cause of death in Thailand: an average of two people die on the roads every hour; one of the highest rates of traffic fatalities in the world. More tourists and expats die or are injured in road accidents than by any other means.

“It was crazy, driving at 160 kilometres an hour on a Friday night, trying to beat other body-snatchers to the cadaver. Thais won’t get out of the way for an ambulance, but they will for Poh Teck Tung, so we’d often get to the accident before the police. One night I was in the back of the van with three dead bodies rolling up against me every time it turned. We’d picked up one of them from a hospital and he’d already been dead for a few days. The stench was terrible,” he said.

BANGKOK CORPSE COLLECTORS ARRIVE AT CRIME SCENE
Near a footbridge on a busy road out in some industrial suburb of Bangkok, we pull over behind a fleet of Poh Teck Tung rescue vehicles. Staff members are running towards the bridge, jogging up the stairs. A policemen stringing yellow crime-scene tape across the top of the stairs lets us pass. Then we see the body: young, male, Asian, lying on his back. The glare of orange streets lights lends the scene a hellish tint. 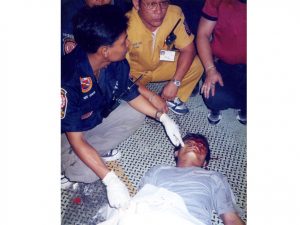 Whether he was shot in the forehead or hit with something heavy like a wrench, nobody’s sure. For once, there’s none of that Thai cheeriness. The mood is somber, voices drowned out by the drone and din of traffic. Speculation runs rife that it might be a drug- related killing, or possibly a mugging—common on footbridges— gone violently wrong. The dead man, in his faded T-shirt and rubber flip-flops, may have lost his life for a few hundred baht.

A few members of Poh Teck Tung kneel down beside the corpse, pointing at the fatal wound, while a crime photographer from the police propaganda magazine, 191 (the emergency line in Thailand), takes some blood money snaps. A few of the cops standing by look lost in troubled thoughts, as if thinking, Who’s going to have to tell his family?

This extract is taken from a much longer chapter on the Bangkok corpse collectors in the non-fiction collection Bizarre Thailand: Tales of Crime, Sex and Black Magic (Marshall Cavendish, 2010) by Jim Algie. It also appeared in the Bizarre Thailand column in Bangkok 101 magazine in 2016.